The trigger works well, I can capture at around 15fps with no dropped frame
But I am not happy with the quality of the pictures.
Not a lot of details, poor dynamic range, very contrasty when capturing in tiff format

Do you think a higher resolution camera (2k or 4k) will increase the details and sharpness?
Thanks

I’ve also found the TIFF image capture to be low quality.
I’ve been told to capture as a raw format, then use OpenCV with a python script to convert those raw files into TIFF files.
I’m still very new to it, so I can’t be of more assistance I’m sorry. Hopefully when I understand it further I can share.

I am using the 2K camera on the universal Mkii, and experimenting with the spin view software to have more control

Thank you.
I’ve also captured in raw format then converted to dng but it’s the same, not much details…

Have you contacted Flir support?

Hi @fabutch have you tried adjusting the gamma setting? I found that gave me a much better scan in terms of image quality.

Yes and they were not very helpful.
They even told me “I think to properly use our cameras you should find someone who can do some programming for you or use third party software.
SpinView itself is meant to be used for camera evaluation, not really in a productive environment.”
I think I could get better help with real users

Hi Projectionist,
I can’t change the gamma setting, it is locked. In Spinview and FlyCap
Which software do you use? How do you do that please?

@fabutch, I’m using SpinView. My camera is Blackfly S so it may be different but in the analogue control section there should be a selection to enable gamma, and that will unlock the gamma setting. You could also adjust black level in the same section. 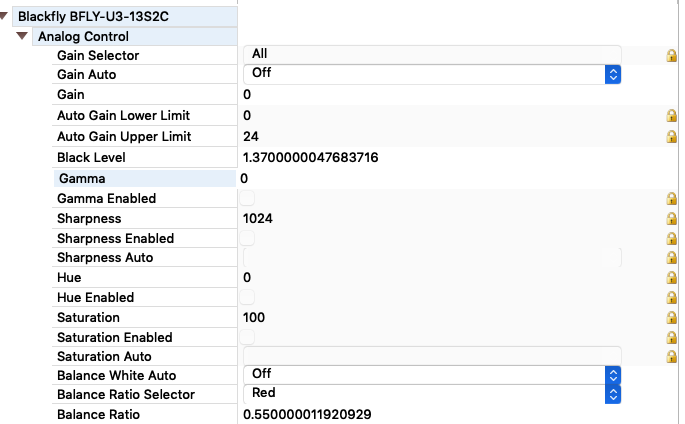 ok thanks. The gamma setting is locked as you can see. Maybe because it’s not the same camera like you said.
Which model do you have?

at what bit depth are your tiff files being created at? also you might try taking your tiff files and creating a video clip from those using the Adobe media composer and the After Effect tools and a couple inexpensive plug ins to help you with the quality.
Your camera resolution should be adequate for good quality scans of super8 and standard 8mm film. Are you in individual frame scan mode or are you capturing a video stream directly from the blackfly camera? it makes a world of difference, individual frame images is the way to go.
I am certainly not an expert by any means but this seems to work well for me with my home made scanner.
thanks!
Al Cassista
acassista@comcast.net

try this and let us know what happens. Reduce to frame rate to 4fps or so increase shutter speed to as fast as you can go and still get an image. Faster shutter speed, meaning shorter exposure, will reduce or eliminate motion blur, but for this you may need more light, maybe a lot more. I have good results under 100 microseconds.

Can you see the grain in the image? If not, you are either misadjusted on focus, or your lens has a problem.

Capture as uncompressed or raw for best quality.

Your camera in fairly low resolution these days, but should work. More pixels means better resolution.

The tiff are 8 bits captured in Spinview or raw converted to dng 16 bits.
I am using Davinci Resolve.
Yes I am in individual frame scan mode with the trigger/sensor hall method.
Thanks

Normally I’m around 3000 microseconds. I just tried 500 microseconds, then increased exposure because of the light loss but I can’t see any improvements.
Yes I see the grain of the image.
Thanks

Is it bad? Thanks! 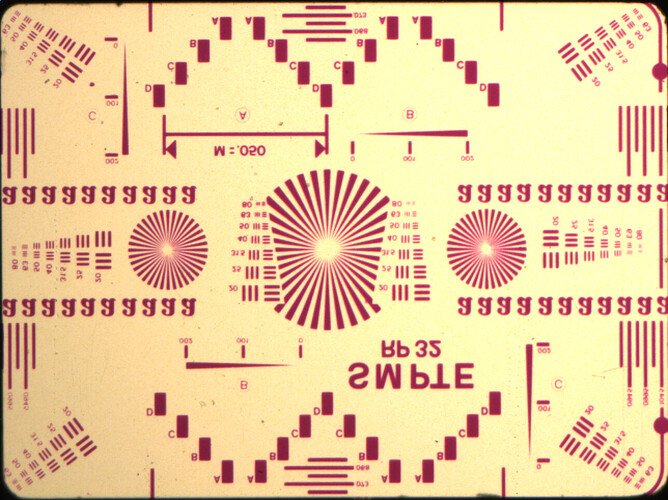 I assume this is from a Super 8 film. Is it possible to get more resolution from a Super 8 frame? The problem I see is the pixilation pattern on the image. Can’t say whether this is jpeg conversion artefacts. How was the tiff image?

Yes It is Super8 film
Yes that’s a good question, is there any benefit for a better resolution camera for a Super8 frame?

The problem I see is the pixilation pattern on the image. Can’t say whether this is jpeg conversion artefacts. How was the tiff image?

The tiff original image is the same
Thanks

Yes that’s a good question, is there any benefit for a better resolution camera for a Super8 frame?

… that depends a lot of who you ask.

At the resolution of your test image, you should start seeing the film grain, especially in darker areas of the frame. If you really love to see film grain, go to a higher resolution. If you have a low-bandwidth internet connection (like I have), you will probably try to get rid of the film grain in the post anyway, in order to reduce file sizes. A higher scan resolution might help you with the reproduction of very fine details in your film - provided the camera used during the film recording is of sufficient quality (the one I could afford in the 70s of the last century was not) and the film stock is good enough (Kodakchrome, no Agfa, for example).

You seem to have a different problem. I have enlarged a cut out of your image: 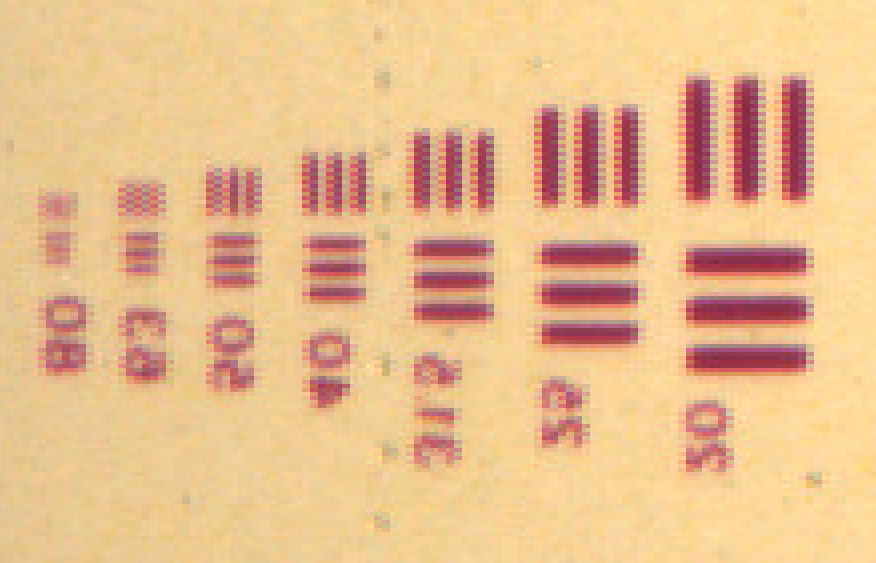 Notice that the horizontal borders of all the resolution bars come out just fine, but the vertical borders show a zigzag-pattern? That is certainly no jpg-artifact. Probably has something to do with the read-out of the camera, treating even and odd lines differently. The last time I have seen something like that was with analog video cameras and framegrabbers not syncing correctly on the video signal. But this is a digital camera …

I was wondering about that. I did not enlarge the image. But even at 75% these problem is evident. So FLIR must look in to this. If the fault is with the Camera.