even though it’s impressive in its pricepoint, the lack of camera reposition in my mind makes it a pointless purchase… and as far as modular design, i wonder if they plan on upgrading their camera or introduction camera repositioning in a later model? If they did couple things then all of a sudden the price point becomes doable and possibly a smart move for someone wanting to get into dailies market.

I just bought a Filmfabriek HDS+ scanner (picking it up in January). It’s 4K, and the camera can be repositioned. Plus it has a wet gate feature that eliminates many of the vertical lines on older prints. It is $10K more than the Cintel scanner, but you’ve already pointed out why it’s not a good buy.

The Cintel scanner was on my list of scanner options, but the fixed camera + the use of a sprocket gear guaranteed that I would never buy this scanner. (I have a lot of old, shrunken film that would get mauled by a sprocket-based scanner.)

It’s expensive. The Scanstation Personal has a fixed camera as well. The cameras in scanners have a very shallow focus, if you move the camera you need to focus the lens as well - all controlled by software, and it all adds to the costs. A malfunctioning scanner with an adjustable lens can be permanently out of focus until it gets serviced by the company’s technician - a fixed camera doesn’t have this problem.

The Cintel scanner was on my list of scanner options, but the fixed camera + the use of a sprocket gear guaranteed that I would never buy this scanner. (I have a lot of old, shrunken film that would get mauled by a sprocket-based scanner.)

The sprocket transport on the Cintel isn’t the problem. Many of the best scanners in the world come with them - like the Arri XT, it has two film transports for each format sprocket-driven or sprocket-less. If your film is in that condition it definitely won’t scan too well on the Cintel anyway so it’s a wash really. The Cintel wants brand new negative film and not much else from what I’ve been told.

If you have vintage, shrunken film, then YES, the sprocket transport is a huge problem. It turns the scanner into a meat grinder. For me, sprocket less transport is a must. It’s at the top of the list of necessary features. So the Cintel was a no-go from Day 1.

Actually the Cintel 2 does have a sprocketless option.

The major problem with the Cintels will remain the poor quality camera. They were meant to replace the camera with something better a couple of years ago (from what I understand the 4.6K Ursa originally - this is talked about in forums such as here as well as what I said before which is that it’s designed for lab-new negatives and literally nothing else), but the lead developer passed away and development is permanently stalled. HDR does make it more versatile, but it doesn’t work very well and with their lead-developer gone there’s not much point in BMD investing in the research and design required to improve the machine. It scans new negatives well, so it’s perfect for dailies and that’s really their target market. The optical sound reader is also ridiculously good, so it’s also a really good machine for transferring 35mm or 16mm audio. If you can pick up a cheap used Cintel it’s worth it just for transferring audio even if you need to re-scan everything on a better quality scanner.

Agreed. Yes, its sweet spot/best case use was for fresh 35mm negative: a market that virtually does not exist anymore.

However, a source has whispered to me that a refresh might be coming this spring (right around the corner). This source advised me to wait on my purchase of the HDS+ in favor of this potential new Cintel. But I literally could not wait based on a tip/rumor/hush-hush suggestion. I had to start moving forward.

So I don’t know if this new version will happen, but I would welcome it nonetheless. It would signal that Blackmagic is still interested in the film transfer market. Such a machine would have to satisfy the needs of the archival market, and I just don’t know if Blackmagic’s heart is in it. We’ll see?

(BTW, I can offer no specs about this machine. I’m only sharing a whispered rumor.)

Are you sure that was the cintel and not the $40K Scanstation Archivist (a redesign of the Scanstation Personal)? It has options for warped film gates and HDR, but it will still be a “licensed” machine requiring servicing from Lasergraphics which is what would make it unsuitable for personal use unless you plan to cover the ongoing servicing costs somehow. From what I understand about the HDS+ it’s fully user-serviceable so you just buy replacement parts and do it yourself.

The cintel wasn’t designed with upgrades in mind. The slow data transfer speeds is why they have to do HDR in a 2-pass mode instead of one pass and that is probably what causes half of the HDR registration problems. If they’ve redesigned it it should be with a faster data link to the host computer so that future upgrades are possible without slowing the entire machine down (for example a 6K camera or an 8K camera with the same scanning speeds). It would probably take quite a bit of modification to any existing Cintel 1 or 2 in order to change over the data outputs, so I can’t see that as being a very viable option.

I’ll be great if they’ve made some advancements, but I’d be quite sceptical at the moment. They’ve had three years to fix the HDR registration issues in software and they’ve done nothing at all about it, let alone the hardware issues as well with it. Plus the sensor, even one of their distributors pre-release was speculating that there should be a 4.6K sensor upgrade: 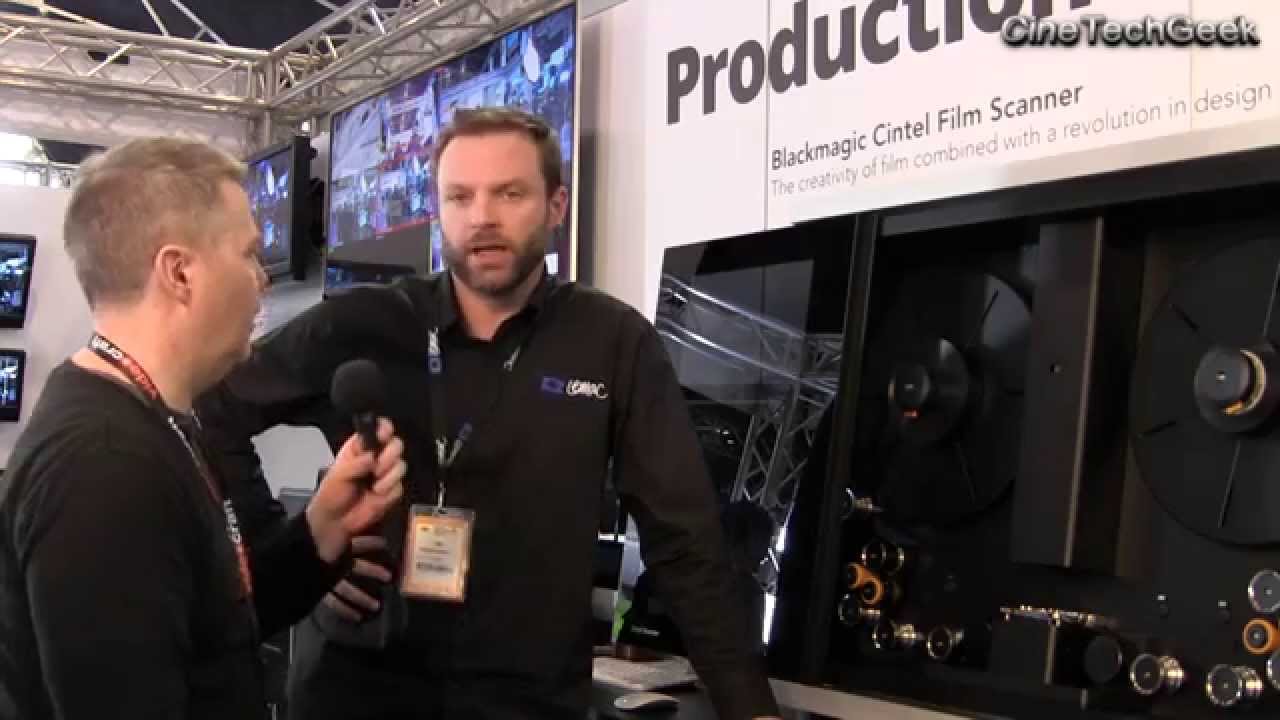 And there are still no archive/warped-film gates available for it either.

Yes, the Scanner Whisperer was quite clear. He was talking about a new Blackmagic Cintel film scanner.

Cool, it’ll be interesting to see then. I wouldn’t expect much, it’s already perfect for their target market for 35mm all it needed was improvement to 16mm and it can own the market for scanning new 35/16 film negs. If they fix the issues with HDR it would make it more useful for other materials, but I can’t seem them investing too much into that market I think it would be improving 16mm scanning would be their priority as that’s what their target market wants the most from BMD. My somewhat educated guess if your info is accurate is that they’ll change the camera to something a bit better, and put in an optical-zoom for 16mm, and just like in the video above they probably have to wait until the next major version of Resolve is released if they’re going to add such a feature for 16mm.