Forums member @VitalSparks has been talking with me about an idea he has for his upcoming scanner design. He is going to try using the concept of “constant power” to drive his motors. I did not know what that is and he was kind and patient enough to walk me through it over a series of texts and phone calls.

Know anyone who could help us prototype this circuit? I’m out of my depth.

Here are some other links/resources that might be useful for further digging:

StackExchange Thread
Possible chip for accomplishing this
YouTube video on varying load with practical application
Datasheet for a motor that might be good for this: https://www.printedmotorworks.com/wp-content/uploads/GPN12-Printed-Motor.pdf

Jeff’s notes to me regarding the actual circuit design: 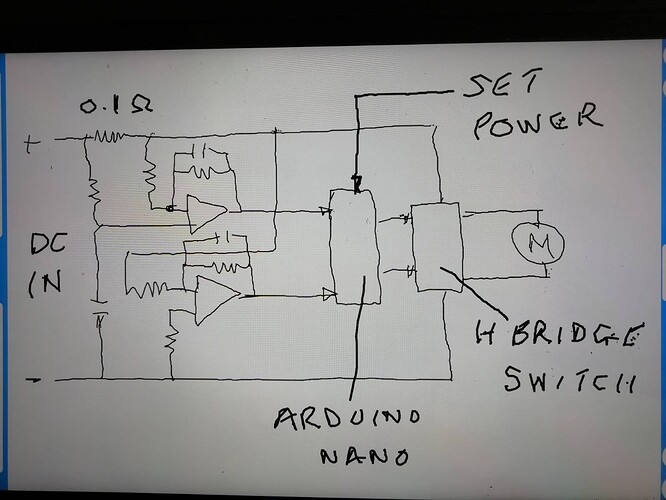 the video is listed as “private” so it can’t be viewed. Can you check the permissions?

Done! It should be viewable by anyone now.

@matthewepler motors are not my strong side, so was trying to follow your discussion. This video maybe also be helpful.
It is a bit late and my “fried is brain”. I could not wrap my head on a reel with very little film and a reel almost full, requiring the same power to spin. And the power to charge/discharge the inductor would change depending on the speed, and with little film more speed, more film slower speed (I think).

Thanks for the helpful link @PM490. I’ll take a look as soon as I un-fry my brain after a weekend with a 4 year-old nephew

Here’s details of the discussion I had with Matthew to which he refers.

Firstly, let’s answer the question - why drive the motors with a controlled power rather than a controlled voltage (or current). There is only one answer - to eliminate the effect of the changing radius of the film on the reel(s) from upsetting the required tension or speed of the film that is being maintained by various external sensors and control loops. These changes in radius may be due to the natural effects of winding the film on or off their reels, or an eccentricity in the bulk of film in one, or both of the reels. This is not uncommon.

Secondly, by 'constant power ’ we are not implying that the drive power cannot be changed. It is essential that power levels to the motors can be dynamically adjusted to achieve the required tension and film speed but, once set, it is the job of the constant power driver to maintain these settings regardless of how much film is on each reel. The tasks of setting and stabilising the film speed and tension is down to the control loops associated with each motor, each having their own appropriate sensors. The constant power circuitry plays no part in this - it merely obeys the demands from the control loops in a very assistive way.

From the law of rotary motion, the power required to rotate a body against an applied torque is -

The film will be moving at a certain Linear Speed, so we have to convert this to Angular Speed which involves knowing the Radius of the film on the reel.

Looking firstly at the supply-reel, where constant tension is required, and assuming the film’s Linear Speed is constant (controlled by the take-up motor) …

Now for the magic result - Because the Radius appears on both top and bottom of the equation they cancel out. Also, because we assumed the Linear Speed to be constant, and 2*PI is certainly constant, we can say :

If the same approach is applied to the take-up motor, this time assuming the Tension to be constant, we find that :

THESE TWO RELATIONSHIPS ARE THE KEY TO CREATING A PRECISE FILM TRANSPORT - it means the control loops only have to compensate for minor changes in the film path, such as scraping the edges of the reels or the passage of a splice through the gate.

It is tempting to think that if the power to the two motors have been adjusted for required tension and film speed that these will remain constant without any need for sensors or control loops. If only that was true - unfortunately neither of the motors knows anything about what they are controlling and do not provide a converging condition. The result is that the transport will ultimately either slow to a halt with high tension, or run at high speed with virtually zero tension.

So, it is essential that that at least one control loop is used to stabilise either tension or speed or both (two loops).

By looking at the proofs above, it will be seen that the powers to the motors are both linear, and proportional to each other. THIS MEANS THAT NO COMPLICATED CALCULATION IS REQUIRED to balance the power to the motors when changing speed or tension. For example, increasing the take-up speed by a certain percentage will cause the film tension to reduce by the same percentage. By increasing the power to the feed motor by the same percentage simultaneously, the tension will be restored to its set value at the new speed. The same applies to making adjustments to tension.

HOW TO PRODUCE CONSTANT POWER.

This can be achieved by either hardware or software (e.g. Arduino). Maxim Semiconductors have produced an Application Note that looks like a neat hardware solution.

For details about how this works see the link below.

The component values will need to be changed to scale down the output power, but this is the system that I am experimenting with currently. A problem that will need to be overcome is that when the film runs out, the motors will both run at max speed because there is no tension. However, there’s a spare op-amp in the main IC, which may be used to sense this, and provide a fail-safe solution. Of course, a 'watchdog timer ’ on the perf-sensor can also be used as a backup.

My preferred solution is to ultimately use an Arduino (or Raspberry Pi) to control the entire transport system, including the control loops, but I do not see this as a trivial task. However, an interim step may be to utilise miniscule Arduino Nano modules to provide the Constant Power and fail-safe functions separately and locally to each motor. Bidirectional operation would also be easy to achieve. It may even be possible to achieve PID control (tension) and PLL control (speed/camera trigger) locally too, but let’s not run before we can walk…

There is no doubt in my mind that Power Control is the only way forward to drive the Kinograph motors, and I shall be exploiting it to the full in my upcoming portable small-gauge (8/9.5/16mm) scanner, which I hope to debut here later in the year. In the meantime, here is a preview of what my system will be like. 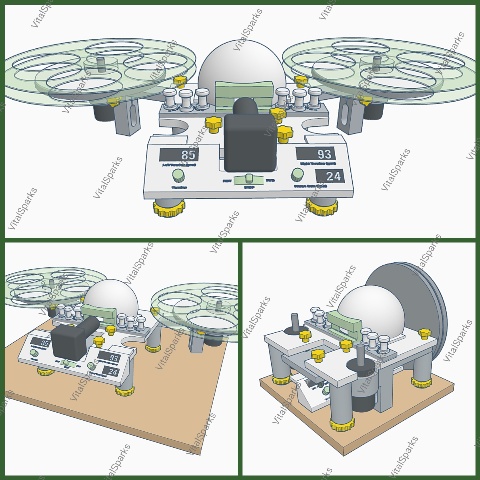 It can take reels up to 17" dia, has an almost straight film path, and instantly folds up into a 10" cube. It has several novel system features, like immunity from broken perfs that I have developed over the past 3 years, and is entirely 3D printed. It consumes so little power that it can be run for many hours on a small Li-ion 12v battery, making it proof against mains failure. It is designed in such a way that a sound head (optical and magnetic) can be easily added. I am also experimenting with a non-contact electrostatic particle remover.

So far I have built the main framework, and am using it to develop the electronics. I plan to have a prototyping running by Christmas.

Just to reiterate the advantages of constant power, consider how a system without it, just relying on control loops, would respond to eccentricity in film on the reels. For a loop controller to respond to change, there must have been a change. This means that, although on average the speed and tension will be maintained, there will always be a ripple in them. Also, throughout the reel, the dynamics will change, making it difficult to choose loop coefficients. Constant Power totally solves this problem.

The final thing to comment on is the choice of motor types. Once again, in my opinion, there is only one choice - brushed DC. Yes, steppers are the most recent types, and are incredible choices in the right situation, but not for the Kinograph, or my own scanner. Brushless DC might also be seen as a good option, but these are not easy to smoothly control bi-directionally. As for brush-life - forget it. The current needed for scanners is very small, and commutator arcing is almost non-existent, so the life is counted in decades. I will also add that gearbox speed reduction is highly recommended. My current design uses 100:1.

Thank you for the invaluable post, Jeff. We eagerly await your scanner’s debut! I’ll be attempting to implement your circuit design for the 16/35mm Kinograph and will report back here when it is complete.

That’s exactly the way I was leaning towards. Weirdly an “analog” feedback servo system is better than most digital motor systems for a continuous case. You can create an exact torque through power usage, as that’s mathematically related. No fuss, no muss.
I’m not personally going that way for video, but for mag audio 100% yes, that’s exactly how you do it, plus crystal clock of course.
For those that didn’t get it. The power to a motor is related to it’s torque. So knowing one number means kinda knowing the other. Simple calibration later and you’re done.
For verification, as I’m in school, you can plot torque vs power on the motor curves from the data sheet. That’ll end with a formula for an exact torque vs power formula for that motor.
You can do this same trick with a stepper motor, but it’s not something easily computed.
Some drives can do it, but most cannot.

You should read my post again carefully. Yes, there is a relationship between power and torque, but angular speed is the third vital parameter that completes the equation.
Steppers, particularly geared varieties, are attractive for intermittent motion but have little to offer for continuous motion and introduce problems for tension control.