In a film magazine, There is a pivoting arm (1) to guide the film as shown in the photograph. This in turn connects to the footage meter. If we put something like this arm to the Take-Up reel and a potentiometer as the pivoting center (2), will it be possible to get information to control the speed of the Take-Up spool in a continuous film transport system? 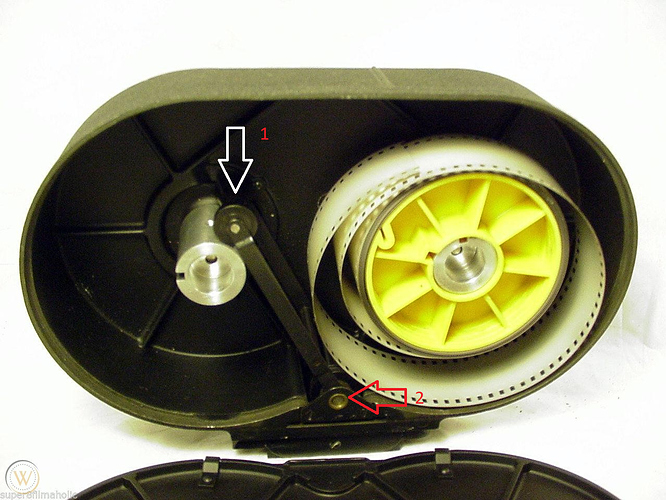 That’s a cool idea I had never thought of. It would give you info on how much film has been scanned and I"m sure you could make all kinds of useful calculations from it.

For now, I’m going to keep going with two tension hubs. I could experiment forever but am feeling like I need to start pushing harder to get to a finished prototype.

This is, however, a great idea and could be useful to someone (including me) who wants to try hacking the Kinograph design to come up with something better/cheaper.

Thanks for finding this!

Thanks for the response. Hope someone will use this idea for a design. For now, I am trying to complete my very simple design of an Intermittent machine using a Geneva mechanism to advance the film and a Clutch driven Take Up.