I’m starting on a gate design and am thinking about making it curved since it’s all the rage with the commercial scanners.

Does anyone know what radius the curvature should be? I want it to be be slight enough that we don’t have to correct the image in post but also enough of a curve to help flatten warped film.

Any help is much appreciated!

The gate design is dependent on the type of camera you are using. An area-scan camera would like to see the film perfectly flat as it captures the frame. A line-scan camera like the Spirit and others use only captures a single (or three) line/s of the image, so a line-scan can take advantage of the curve.

Having said that, the issue you are trying to solve, how to capture a warpy film, can be dealt with to an extent. The gates that use a pressure plate, as in a camera or projector, can give us guidelines. The Richardson movement that was mentioned in another thread is a good example. A version of that idea would help many films. If a truly terrible film needs capture, another approach would be to make a sandwich between two pieces of optical glass, like microscope slide glass, or similar. This idea needs a stop-frame capture, as you would need time to open and close the glass as the film moves.

many choices, and maybe separate gate designs for different situations. This implies a quick-change type of mounting, so you can change gates as required.

Thanks, Grace! That makes perfect sense. I have a good gate here from a 35mm machine with pressure “rails” instead of a full plate. It seems to work really well. I’ll see what I can come up with.

Any visual references to existing solutions are most welcome!

Also, I wonder if just a slight curve would be acceptable and/or effective with warped film? I suspect that any radius qualifies as a distortion and therefore should be avoided (since we’re using a full frame camera).

We could switch to a line-scan camera at some point but it’s too late for now as I’ve already spent the money on a full frame option based on some other recommendations.

With an area-scan camera you could get away with a little bit of curve if your depth-of-field is greater than the curvature. To get a larger depth of field, you need more light, maybe a lot of light, and speed up the shutter, and close down any iris you have in the lens. I am projecting for my lighting system, a 400watt light, with a shutter speed of somewhere around 20 microseconds. This may be enough. My Spirit has a 300 watt xenon lamp, but the newer ones went to a 700 watt.

Does anyone know someone with a Mueller scanner? They seem to feature a curved gate AND do a frame-by-frame capture. Most curved gates I’ve seen use a line scanner camera. I’m curious if we can get measurements of the gate.

Also I’d LOVE to see one of their optical sound pieces but when I inquired about them they said they only sell them to people who already own the machine or are purchasing one. Well played, Mueller.

Here is a close-up of the gate that I’m using. It’s from a Cintel Telecine machine. You can see the curve isn’t constant, it’s more or less flat over the light and more curved on the edges to keep it flat against the gate. 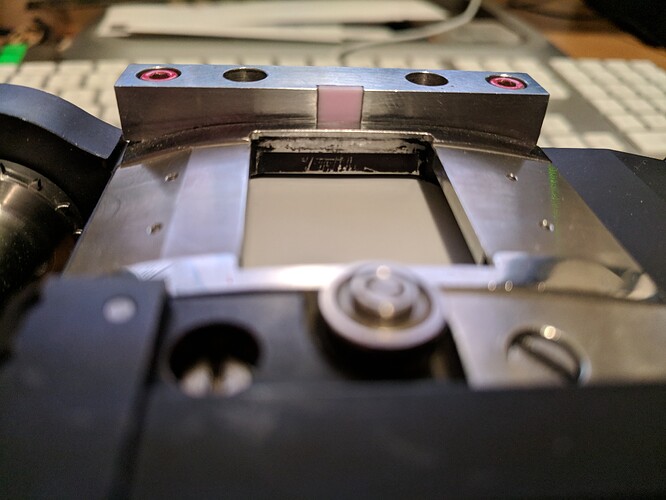 Thanks @The_Projectionist! This is exactly what I needed. How are you liking the Cintel, btw?

Follow-up question, is there a gate mechanism that rests on “top” of the film, opposing the side of the gate that you have pictured here?

No fancy machine here, just the gate for making my own machine.

I have a 16mm as well that is very similar. They have no pressure plate on top. There is a bearing on a spring loaded arm that runs along the side of the film but nothing on top. From my crude testing with it clamped to my bench and the film taped in place, minor warping or cupping isn’t a problem.

The gate I designed/printed for 8mm on my build has a radius of 187.5mm on the film path leading into and out of the imaging area, but is flat through the imaging area itself. The transition from the flat imaging area into the curve was softened to keep the handling gentle.

My hunch is that my curve would be a bit too tight for 35mm, and the Muller machine appears to have an even greater radius on their curve for the smaller gauges!

Does anyone potentially have any experience in fabricating their own gates? I’d like to start looking into getting mine milled out of PTFE or Delrin, but I don’t know much about them aside from general material properties and exposure to parts made for other industries.

(I’m pretty happy with my design, just getting concerned about the 3D Print holding up and not damaging the film.)

@johnarthurkelly I have experience with Delrin gates on 35mm projectors. In that situation it works very well. It withstands the heat well and there isn’t a lot of wear. The wearing with Delrin also smooths out any slightly uneven surfaces and also acts as a sort of self lubricating surface. It’s probably overkill for your situation but if your willing to pay for the Delrin that’s what I would do. I don’t know if you are moving the film continuously or not, but I don’t know how that would affect 3D printed materials.

Cool - the film is not moving continuously in my setup, but it does move pretty fast. I’m more concerned with the film handling (the 3d print isn’t exactly smooth) since I’ve already mitigated heat issues.

Were the 35mm Delrin gates you worked with custom made or a commercial product?

They were part of the Kinoton projectors that I’ve worked with. They were the “luxury” German brand of projector. Very nice projectors