I’ve got a lot of reading to do it seems. Your project was shared to me by a dear friend who is now gone from this world. He used to shoot feature movies back in the 70s and 80s all on Super 8. Miles of film. 30 or so features at around an hour or better. While nothing famous that I know of, still his legacy and life’s works.

That said, his daughters have put myself and another gent in charge of getting it all converted to digital. I’m going to be doing this from afar (most probably building two machines…one for them, and one for me).

My first question, which I’m sure if I knew the correct terms for I could search and find, is dealing with potential film shrink. I don’t know how the film was stored. I don’t know its condition…so what worries me about the coolest part of your build, the 3D printed rollers, is if the teeth might do harm because they might be mis-aligned if the film is no longer in the condition it is meant to be.

Anyhow, cheers for your project! Cheers to sharing it with the world! I can’t wait to use it on my own 8mm and 16mm film stock as well!!!

If it was shot in the 70s and 80s, then shrink is unlikely to be an issue. You can inspect the film and look for tears, perforation damage and shrinkage. Whatever scanner used, you will need to do this anyway. If there is shrinkage, which is unlikely, or brittleness, then you can relax the film again using camphor carefully.
The easiest method then would be to purchase a fully reconditioned projector, fit a hall effect sensor and a triggered camera fast enough to keep up with 18 or 24fps (like the PGR Blackfly), and replace the projector lamp with a better light source. You can then transfer the films in real-time, and capture the audio at the same time.
Use the hall-effect trigger to also lay down an extra audio track (A “Click-Track”) so that you can then sync the audio later.

@yosemitesamiam sorry for your loss. It sounds like your friend was an interesting person to know. I’m glad that part of him will live on in his films.

@Peter definitely knows what he’s talking about. If you need more info on building your own projector machine, I’d definitely follow up with him.

Unfortunately, Kinograph isn’t really set up to do 8mm very well at the moment. I would suggest looking elsewhere until I complete the upcoming 8mm-specific machine. A prototype is in development but it could be several months before it sees the light of day.

Please keep us updated. Regardless if Kinograph is your solution, the community is (I’m sure) anxious to help you find the answer for your particular problem and woud love to see the results.

Hey guys, sorry I haven’t replied…apparently I don’t get notifications!

Anway, Thank you @matthewepler for your work!

@Peter I’m very curious to know more about the projector style unit you describe. Is there a link somewhere you can share? I don’t mind converting projectors…this sounds very Emmett Brown.

I’ll document it up and put it up here.
Unfortunately I broke my PGR Blackfly camera last night in an accident, to anyone using one, be extremely careful of the USB connector, or preferably, get a bale with screw lugs, as the connector is relatively easy to snap off the board, destroying the camera, which was the source of many swears and tears last night. 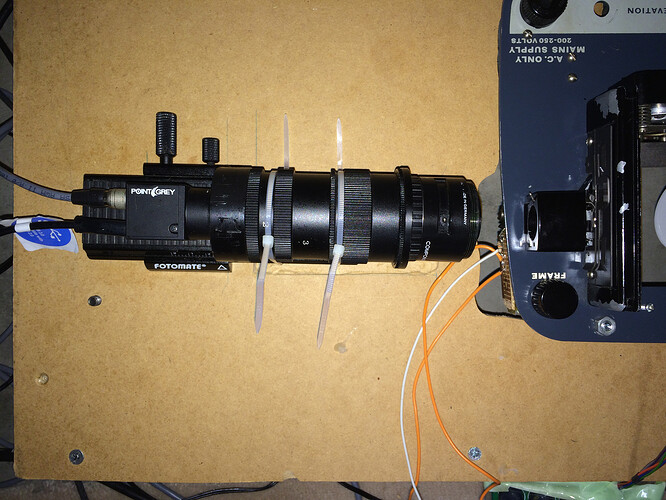 This is the Doc Brown method, get a PGR camera, attach an enlarger lens (reversed) onto it, and take the lens out of the projector, and point the camera at the film gate.

Fit a hall effect sensor to trigger each time the pull-down of the film occurs, (you can see the Vero Board near the lens) and use that to trigger the camera to capture a frame, and to trigger the LED system to flash to illuminate the frame (or use a constant light source)

This is the Doc Brown method, get a PGR camera, attach an enlarger lens (reversed) onto it, and take the lens out of the projector, and point the camera at the film gate.

Fit a hall effect sensor to trigger each time the pull-down of the film occurs, (you can see the Vero Board near the lens) and use that to trigger the camera to capture a frame, and to trigger the LED system to flash to illuminate the frame (or use a constant light source)

About as stupid simple as it gets, Thanks Peter!

@Peter thanks for the shot! Any chance you have specs on what’s shown? Thanks so much!

To answer the questions in order.
In that photo is the PGR Blackfly, running direct to the computer via USB3, at higher than HD resolution. I have also run a USB3 Grasshopper in the same config for 24fps at higher resolutions.
I am not using a frame grabber, I am capturing the frames via software via the USB3 interface.
I am getting 24fps, I can get 28fps without a problem
The enlarger lens is the one I mentioned in the other threads, the Schneider Componon (-S) 50mm
No micro-controller in the projector, as the projector just runs at normal speed, (Which has the advantage that you can also capture the audio in real-time)
There is a magnet on the drive-shaft, and a hall effect sensor mounted on the frame, as the shaft rotates, it triggers the hall effect sensor (i.e. when the film is stationary in the gate). That is the only modification to the projector, though I would also recommend removing at least one of the shutter blades.

The hall effect sensor triggers both the LED light source to flash, and the camera software to capture the frame.
The footage post-capture can be processed through the free version of Black Magic’s Davinci software for colour correction, stabilisation and cropping/editing etc.

For Audio, you can also feed the hall-effect sensor to an unused audio channel on your audio capture equipment, this then creates a ‘click-track’ that you can use to sync the audio later if your projector doesn’t run at a perfectly regulated speed. (i.e. you will have a ‘click’ for every frame, you can then write software to adjust the digitised audio to the correct speed with frame level granularity)

Hope that answers the questions.

Again, be careful with the USB connector to the camera, it is relatively fragile.
I smashed the PGR camera in the process of taking that photo, so I hope it really helps as it cost US$550 to take that shot

(I dropped the flash when packing up after the shot, it fell onto the back of the USB3 cable, snapping the board internally in the camera)

Oh no!!! @Peter I’m so sorry to hear that. It was really helpful, though. Ah, man. Heartbreaking.

Yeah, especially with the Australian dollar completely in the toilet. When I bought the camera a year or so ago, the exchange rate came to around AUD580, not the exchange comes to $800 Australian, not sure if I will be replacing it.

Something else worth mentioning, the other cable you see in the back of the PGR camera, is the cable to carry the ‘trigger’ signal. Be sure to order the GPIO cable with the camera, as it is not a standard connector. I would also recommend ordering the adapter plate to allow you to mount the camera using a normal tripod thread, as the size of the plate varies from camera to camera as well.

That is horrible!!! Thank you for taking the shots and explaining this process in detail. I could basically get away at the cost of a camera for this project. Nice.

What is a good quality S8 projector from yesteryear I can pick up that can handle the load?