Hi. I’m at the low level of the community no prior knowledge and just putting things together without planning and seeing if it works. I’m probably going to ask a stupid question but hey a fool you asks is a fool for five minutes a fool who doesn’t ask is a fool forever.

This is my current build (I can move everything around if needs be). There are two stepper motors marked 1 and 2 in the picture. They are running off the same code so speed and steps are identical. Everything works fine initially but then after five minutes the film near 2 starts to get tight and pulls the reel off.

My question is, Is it because of the “pulley system” that number 2 has more torque and therefore creating more tension? Is it as simple as increasing the steps on 1 to create some slack?

Hopefully this will aid a DIYer in the future. 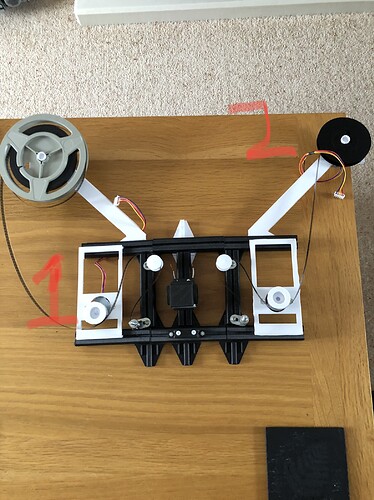 Learning is what we’re all about! The problem you’re encountering is likely due to ye olde angular distance differences between the reels. A picture will likely explain better than I can. 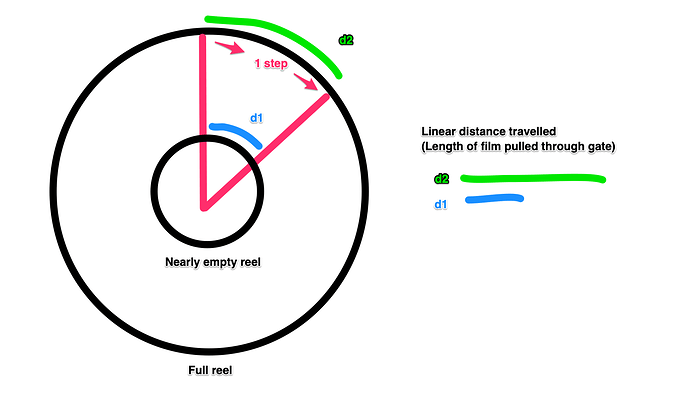 So when you’re starting out, your feed reel (left side) will be giving you more film than you’re taking up.
About halfway through they’ll be matched.
And by the end, you’ll be taking up more on the right than you are giving out on the left.

To fix this, you can get rid of the motor on the left! I suspect you don’t really need it to feed you film. The motor on the right should be capable of pulling the film it needs. Then when you’re done, you switch the reels to rewind.

Does that answer your question?

Matt, As always thanks for sharing your knowledge. Who knew I would be learning about physics as part of this project

Thankfully my system is modular so I can just swap things in and out and move them around. I’ll put in a caster in place of the left stepper and see what happens