Thought I’d post an update on this. My machine design has completely stalled as Flir have struggled to send me the machine vision camera cable I ordered due to the pandemic on 17th Feb (it was on backorder at the time), so in the mean time I’ve been busy trying to design a workflow for sound movies.

I’m hoping to build something that is both useful for me shooting sound Super 8 today, as well as being able to transfer my Dad’s old films with sync sound. He shot a lot of 200ft magazines when visiting Canada and the US in the late 1970s, and spliced together, these movies are far too long to try bother correcting the sync in post production by moving and stretching the audio manually.

It dawned on me that they share the same problem: both the camera (for dual system) and the projector (transferring sound films) aren’t reliably working at a constant and known speed.

The dual system approach is more obvious, if you can’t get hold of a crystal sync conversion (no idea where I’d start doing that today in the UK), then creating a modern alternative to Pilotone sync is the best approach. I’ve no interest in using reel to reel tape for various reasons, so I need to try and generate a pulse per frame to either left or right audio channel in a digital recorder (and then the other records the actual sound). I used to use a Sony Minidisc MZ-RH1 for wild sync on my Super 8 movies, so I’ll either dig that out or invest in a Zoom H4N / equivalent.

That will then create a sound file that looks like this (crappy mockup):

When you transfer frame by frame, those 18 or 24 frames per second are always rendered with equal spacing between them. That means we need to shrink or stretch the audio at various points to match that.

One challenge I’ve got is that I know software for this exists, as fellow forum members I’ve encountered on Filmshooting.com had written simple scripts to do it in ANSI C - but I am struggling to get hold of any of them again over a decade later. One of them is looking for it in his backups for me, but that might pose a bit of a hurdle for me as despite having some programming experience, audio scripts aren’t something I’ve done before.

The problem is the same when you run it through a projector. Even if you do a real time transfer, audio can go out of sync with the capture device. We don’t have a flash contact for a projector, and the sound projector I’m going to use is actually a different model than the modified projector I will be using for image capture. We do really want to use the benefit of the sound heads on that old projector though, as it’s far easier than building them new.

The same circuit that will generate a 1kHz pulse per frame from a movie camera, should be usable to do the same from a projector. There’s two options I can easily spot - either use a physical trigger (which requires modifying the projector) like a hall sensor, microswitch or laser, or - use the shutter blade interrupting the film in the gate to generate a pulse.

I like the latter option as it decouples the device to the projector, and it’s very simple. The dual system sound circuit I’m building uses a PC (prontor compur) flash to 3.5mm cable from the camera as a simple switch per frame. For the projector, instead I’m thinking use a phototransistor. Aim the phototransistor at the projector bulb, and the shutter interruptions activate the switch. The rest of the circuit is the same, generating the same 1kHz pulse.

The number of blades on the shutter will then instead create say 3, or 5 pulses per frame depending on the projector design, but apart from that it’s basically the same. The number of pulses generated only becomes an issue when you decide on the relative speed of the audio, but not for stretching it out so the pulses are equidistant.

So here’s the prototype on a breadboard. For some reason the PC cable I bought in haste on ebay doesn’t make good contact with the camera (Canon 814xl-s), so it looks even more rough than it should as I’m using loosely touching jumpers instead. Probably needs contacts cleaning, or the centre pin on the cable is thinner than it should be. 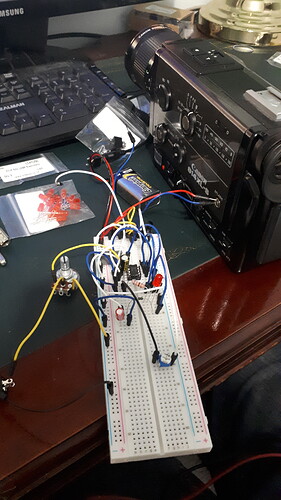 As you can see the LED illuminates per pulse, there’s a momentary push switch to test it too when using it without a camera connected. The pot controls the volume level of the pulse going to the digital recorder, which is really important to avoid L/R channel bleed if using a stereo output to the recorder and combining the audio, or completely useless if using 2 cables and discrete inputs on something like a Zoom H4N.

I got this schematic years ago on Filmshooting.com, it’s a really simple circuit and just uses a 555 timer. I will probably build in a few extra’s to make it more usable for dual system out and about, like a low battery indicator. You could probably even put in a simple remote trigger for a recorder, to avoid having to start it each scene, or leave it running the whole time.

You can see the pulses forming in Audacity, and I’ve attached the waveforms so you can see the outputs for yourself for the circuit.

…and here’s an mp3 export of what the pulse actually sounds like at 18fps - http://rickbaines.com/audio/pulse%20sync.mp3 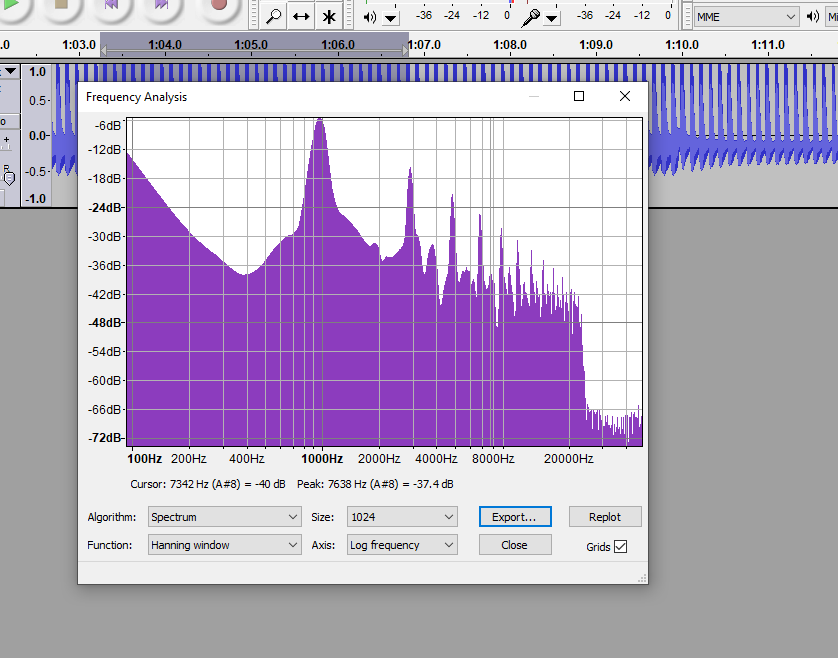 This is a great post. I’ve been thinking about how to tackle physical sound capture too for Kinograph because I’m afraid that AEO-Light is just going to take too long to render sound for a whole feature. But we have yet to see if that will be the case.

In a conversation a few months ago, @ednisley mentioned the exact approach you are suggesting. I think it’s a great way to go. So glad you’re testing this out! Please keep the updates coming

Thanks Matthew, will do

I suspect this will complement approaches like AEO-light, as that appears to only cover optical sound. Whereas a pulse sync will work for magnetic stripe sound.

I wonder if anyone’s ever done any analysis on how prevalent each is for the relevant formats. Optical sound on Super 8 seems comparatively rare, but I imagine is the standard on larger formats (as the fidelity becomes better).

I read once that Kodak claimed sound cartridges made up for about 5% of sales when they were available. Add that to people who added stripes afterwards, and striped commercial movies on the format. So still fairly niche, but a sizeable enough segment that any transfer machine for Super 8 needs an approach for transferring magnetic stripe if it’s to be universally applicable.

I have some home movies with magnetic sound, and now I have realized that my projector that I plan to rebuild does not have sound capabilities.

Are there any plans for Kinograph to tackle sound movies? I’ve seen that the sprocket sound variant is discussed in much more detail than the magnetic counterpart, where the magnetic sound is guaranteed to require extra hardware, in contrast to the software approach to sprockets that seems to be the most popular method.