These lenses good for a project?

Stumbled across these two lenses at a flee market. too cheap to walk past. Don’t understand lens numbers. Can someone quickly say if they are any good for scanning super8? 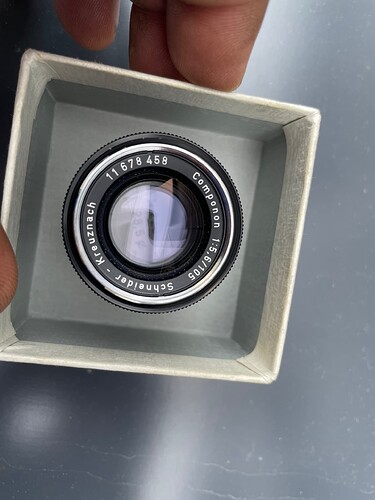 Apart from the lens, you have to think about which camera you intend to use it with.
In this forum we are several users using 50mm enlarger lenses to digitize Super8.
Specifically in my case, I use a Rodenstock Rodagon 50mm f 1:2.8 lens in conjunction with a Raspberry Pi HQ camera, which requires an approximate magnification of 1:1.

The maximum aperture of f 1:4 should not worry you. In my case, during captures I have the lens set to f 1:5.6, although f 1:2.8 maximum aperture lenses are said to give better image quality than f 1:4.

In my opinion, the 50mm lens can serve you perfectly to get the job done.

I leave you a link with examples of use of these lenses.

This is a problem I currently have and that I think is relevant to many scanner builds. The Schneider Componon-S has become somewhat of a lens of choice here in the community and many suitable cameras, such as Point Grey cameras or the new Raspberry Pi HQ Camera, use a C- or CS-Mount. So what is the best / a good way to mount the Componon-S to C/CS-Mount, either the right way around or in reverse? The ideal and straight-forward solution would be an M39 to C-Mount adapter and a bellows or exten…

Thanks for a quick reply. Been trying to read up on lenses a bit.

Is there a spesific reason why the 50mm one is prefered, over something like 40mm or 28mm? I mean, if you want to build a more compact setup with a shorter camera proximity to the film path, or are there disadvantages (besides price) to getting something with a smaller focal length?

I’m not an expert on the subject, but I assume that using 50mm lenses is related to issues of price and availability.

Longer focal length lenses such as the 105mm were used with negatives up to 6x9cm.

Logically, the most used would be 50 mm, which we now find easily and at a good price.

In the case of the Raspberry Pi HQ camera that I use, we are talking about an approximate magnification of 1x, which with the 50mm lens is easily achieved with a lens-film distance of about 77mm and a similar extension between lens and sensor. .