I’m not sure if a wetgate is on the horizon for the kinograph, I’ve considered retrofitting one to my current scanner.
I always had my suspicions that a paint roller might do the job, and looks like I found one at the hardware store that looks just like the one used on the HDS+

I’m going to 3D print a component to hold them and test it on some junk prints I have. I’ll soak them in IPA.
You can see the HDS+ wetgate setup posted here

I’m also not sure if they should roll, or just stay stationary. I’m thinking stationary apart from the issue of getting dirty stuck and scratching. The film would have to be clean before of course

Results will be posted here 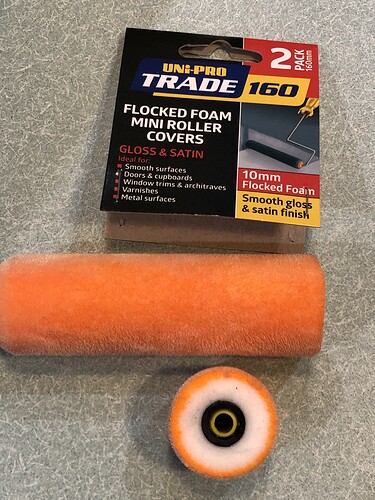 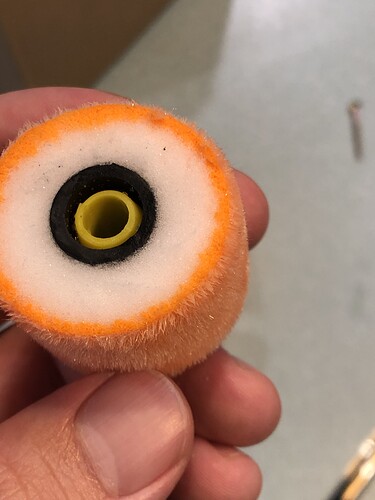 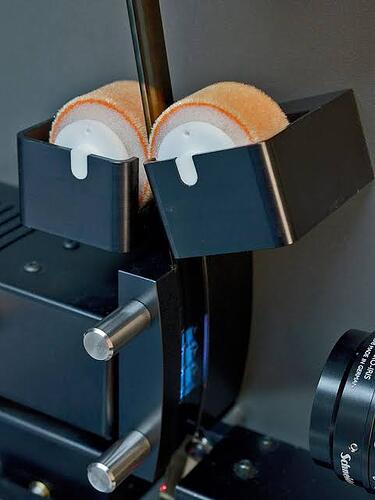 Really looking forward to these results. I’ve been staring at those Filmbariek rollers for a while. I thought they were all foam, which made no sense. This roller you found makes more sense. I still don’t understand why they have to be rollers if they don’t spin.

I’ve been trying to find a post I saw a while back of a guy who made is own wetgate using film cleaning cloths. I’ll be sure to post it here if I can track it down.

Thanks Matt, you know I don’t actually think they roll after looking into it a bit further, the keyed insert probably just holds them in there firmly. I 3D printed a mock-up of their vertical one, and also a horizontal version.

So far they are working very well. I will print a little drip tray underneath, I go a little heavy on the alcohol sometimes.

I’ve been blowing a fan over the rollers on the right to aid evaporation so it’s fully drying before reaching the tape up spool. I’ll get a squirrel cage fan and some type of air knife printed up to make it a bit cleaner 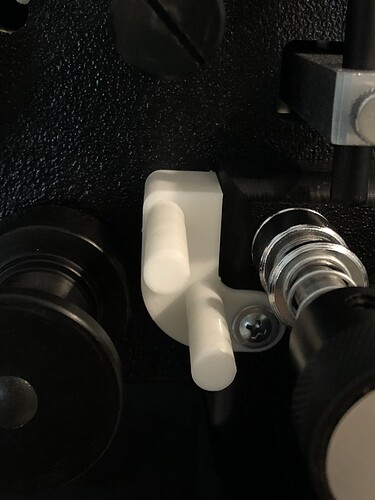 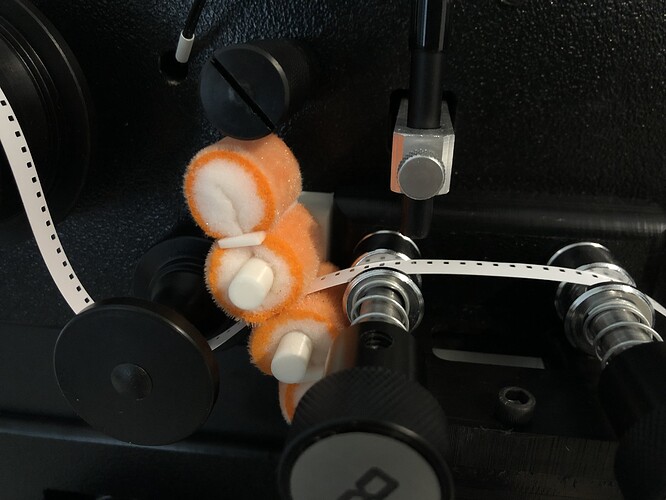 Here are some before/after. This isn’t the best example, the wet scan is actually slightly out of focus which would make the scratches also appear less prominent. I need to add a micrometer adjustment on the focus/z axis of the camera block, just like a microscope has a rough and a fine adjustment. 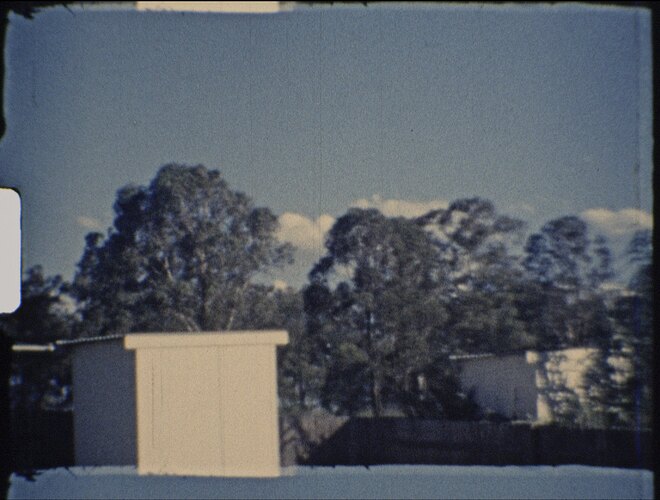 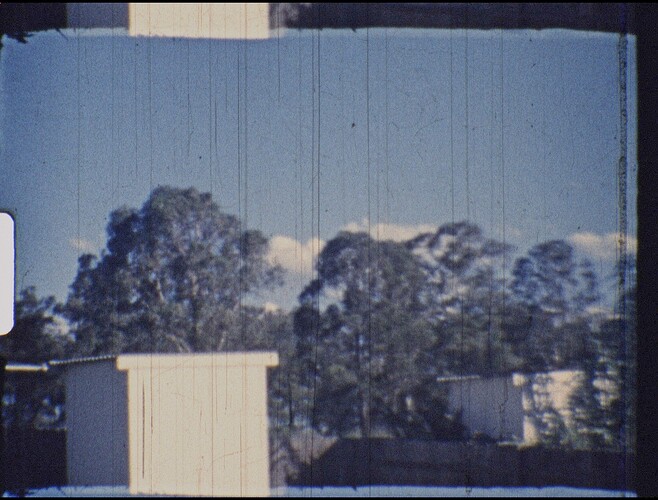 wow this is great! This is really exciting. When I get past some of the more pressing hurdles I’m working on I’ll try to recreate this. Keep going on it! We can encorporate your work into the final public design

Wow. This is really encouraging. Will reduce tremendous amount of work from a restoration workflow.

Wow! This is a really interesting hack! I have an HDS+ scanner, and those rollers look reeeeeeally close to the kind that Filmfabriek uses.

The rollers don’t move. They also fit into a tank that catches any excess alcohol that may seep through the rollers. Consider adding a small well to the bottom of your rollers.

Also, the HDS+ is a tall unit. It’s built this way so that the alcohol from the wet gate has a chance to dry before the film gets to the take-up reel.

Filmfabriek also recommends 90% proof or higher so that it dries faster. We are currently using 70% isopropyl from the local CVS drug store. That forces us to capture at a lower frame rate in order to give the alcohol time to dry.

We have found that we need to spritz the rollers about every 50 ft. of film at our 6 fps capture rate.

As an owner of the older RetroScan Universal Mark I, I think you might have a sizable market interested in a workable wet gate accessory for the newer Universal Mark II if you wanted to pursue making some dollars off of your idea. Many people have tried to fit some sort of PTR roller setup or wet gate apparatus to those machines over the years, but no one has really succeeded.

Good luck! No matter what all the pros say about Filmfabriek’s solution not being a “real” wet gate, it does help reduce vertical lines on the captured image. And if you do any kind of digital restoration afterwards, then reducing vertical lines reduces the amount of labor and time you spend fixing the image in post production.

You got your scanner really quickly! I’ve followed your posts on the moviestuff facebook group, i think we’ve chatted in the comments section

I’d love to hear some more of your thoughts on the machine when you have time, maybe you could make a new post on the forum here?

Yes I have been thinking about a small catch dish underneath, I have gone a little heavy with the alcohol and it’s dripped down. What’s the cost and lifespan that FF quote on the wet rollers?
I’ve been using 100% iso alcohol, it dries quite fast, I’m running the machine at it’s factory set speed but assisting evaporation with a fan. The Mkii could be modified to have a longer film path, I’m considering adding a motor extension kit, then adding PTR rollers to catch any dust for dry scans, and then a few extra rollers on the RHS of the gate to allow more time for the film to dry.

I have considered making them for sale, I don’t know how roger may feel (i’m sure he will read this!), and i’m not sure it would be worth proving all the associated support on how to use them

If I did sell the attachment, i’d also have to sell a little dryer for the film along the way, otherwise make a longer film path attachment.

I don’t think Roger would care if you made an accessory that actually makes his machine more useful. In any event, there’s nothing that prevents you from doing it. You don’t need Roger’s permission.

I’ve observed that, time and time again, when I suggest that clever add-ons like yours be turned into products, their inventors are reluctant to do so. I get it. Making the product and selling the product are two different sets of skills. (Supporting the product is a third.) Makers don’t always want to be entrepreneurs. That’s cool.

As for the Filmfabriek HDS+, it’s a very nice machine. It cost $40K. That’s a mid-level price for a decent film transfer machine. I would slot the RetroScan Universal Mark II on the low end for quality/affordability. The Wolverine and its cousins are beneath that, and I would never use one of them. Not worth the hassle and poor image quality. On the high end, you have all the other machines like the LaserGraphics ScanStation models, the ArriScan, the DFT Scanity, the Golden Eye, etc. These machines are all in the $100K or higher price range, but they do a great job.

One thing to know about these scanners: they still require a significant amount of post-production work if you want to create nice movie files. The high-end scanners do stabilization downstream from the scan, but the HDS+ does not.

In 2019, I had a custom PC built and bought a license for the Diamant Film Restoration Suite. It’s a software suite of tools that helps you restore film. Stabilization, dust removal, vertical line removal, and a bunch of other tools are part of this suite.

We’ve had to learn all of these processes from scratch, because there is no formal school you can attend or online classes you can take to educate yourself about the process. You really do have to learn by doing.

The HDS+ scanner is the first part of this process. It has a 4K/10-bit camera that captures beautiful images. We have had some issues with dust on the sensor, and we had a scratched red LED, but Filmfabriek has been very responsive to our issues. They sent us spare parts and have been quick to acknowledge and help us fix our issues. If someone was going to spend money on a scanner like this, I highly recommend it!

(This was kind of a meandering post. I hope it was helpful.)

Yeah I’d love to, but I just get the feeling a lot of universal users are happy just providing SD scans to their clients haha.

Do you happen to know what camera the HDS uses? I’m assuming a FLIR blackfly S? if it doesn’t say the model number, if you ran FLIR spin view application with the camera plugged in, it should display the model number.

The camera on the Universal II is a great camera, It’s a FLIR cam that’s listed as 10/12bit if you want it to be. I think it’s just the software that goes with the universal scanner that bumps it down to 8 bit (which comes back to the majority of users still using SD)

The stability of the scan straight out with no stabilisation is excellent, the gate is rock solid. I don’t apply any stabilisation unless the film was warped or had damaged sprocket holes. does the HDS scan jump around a bit?

When scanning with the universal, I need to modulate the LED output to adjust the exposure as I don’t want to use the auto exposure which is just adjusting the gain. I believe your HDS adjusts the LED automaticly during the scan, so you could essentially let it do it’s own thing?

It can take me ages to scan a 400ft reel if the shooter kept going inside - outside - inside because I can’t adjust the LED quick enough during scene changes, so I have to pause, rewind, set brightness, continue. I WISH the moviestuff software could control the LED output.