Yet another 35mm scanner (microfilm)

I’m interested in scanning some old books in microfilm format (and later, on microfiche cards with an XY platform) for OCR/preservation at Project Gutenberg. It’s generally stored on small reels, 35mm (sometimes 16mm), usually unperforated, usually black and white. Material generally has significant space between pages, but the spacing is not super consistent, and it often doesn’t fill the frame. Eventual target is 300-600 DPI equivalent.

I’ve been planning this off and on for years; I have a CHDK-compatible 20MP compact camera (which should enable inexpensive raw usb tethered capture), a raspberry pi to run the capture interface (CHDKPTP), and a basic arduino/ramps control system for motion control. I am looking to do some initial feasibility tests in the next month or two; determine if the camera’s macro capability is sufficient, or if I need additional optics/z-axis control.

My current plan is to use a stepper on the take up reel, and a standard DC motor on an H-bridge for tensioning / rewind on the supply reel. Optical encoder wheel on the first spindle to measure linear velocity as the take up reel fills. Start/stop operation for initial design, but may be possible to move to continuous later. I have a 10W white COB LED for backlight (will need to print a diffuser).

Any comments? Am I reinventing the wheel unnecessarily? The kinograph film transport looks quite useful, but my resolution target is much higher.

Do the reels of film have perforations that are the same standard as movie film? If so, you should be able to use those to build a good frame-by-frame design.

As for the motor designs, there are people who have made machines with steppers at the take-up reel that have had good results. My main concern here is the size of your reels. The larger the reel, the harder it is to get them to start/stop spinning. If they’re small and light, you should be fine.

In sum, if your reels are smaller and lighter than what Kinograph is dealing with, a re-design that is simpler on the transport could be a good way to make your build more efficient and cheaper. If not, you may want to consider Kinograph’s designs since they have benefited from so much input from a variety of minds here on the forums.

I hope you post progress here on the forums. I’d love to see whatever you come up with!

The ones I’ve worked with were unperforated. Lengths are quite short by motion picture standards… standard size is 100’ of 35mm film, on a reel ~4" in diameter (don’t have one handy to measure).

I like the multi size roller design… I’ll have to print out a few and dig up my test reels.

The library microfilm transports are generally quite simple… reels, one or two rollers on either side, and film goes between two glass plates. Typical: 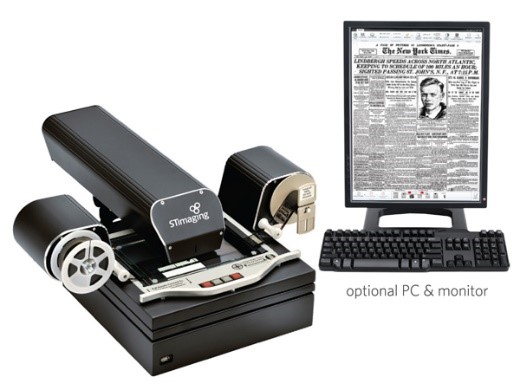 Okay… CHDK works on my cheap used camera[1], including tethered operation and shooting directly to the computer. Macro distance works down to about 1 cm from the lens when fully zoomed out. Depth of field is razor thin, as expected at F/3.5. Out of the box, it takes ~6 seconds to remotely take a photo (in poor light, with autofocus), and it does not respond to chdkptp’s subject distance and aperture settings.

Poking through the CHDK forums, other people have gotten focus to work via scripts, but aperture may be tied to optical zoom. More reading/experimenting needed.

[1] I picked a used Elph 160, because it was the cheapest 20MP+ camera I could find with a CHDK port. Camera plus power adapter were about $30. I’ve also considering grabbing a linear CCD sensor from a photo scanner, but that is significantly harder to repurpose. DSLR/DSLMs are hit or miss for tethered shooting outside the very high end. Anyone tried gphoto or such with one of the chinese industrial cameras, like Eaton?

I got manual focus working on the camera (set_focus works, but MoveFocusLensToPosition seems to be more precise), and I found my test reel, spindles and takeup reel.

This is with the camera nowhere near parallel and the film just held up to a lamp. Next test, better backlight, and try with camera parallel to see if resolution is usable. 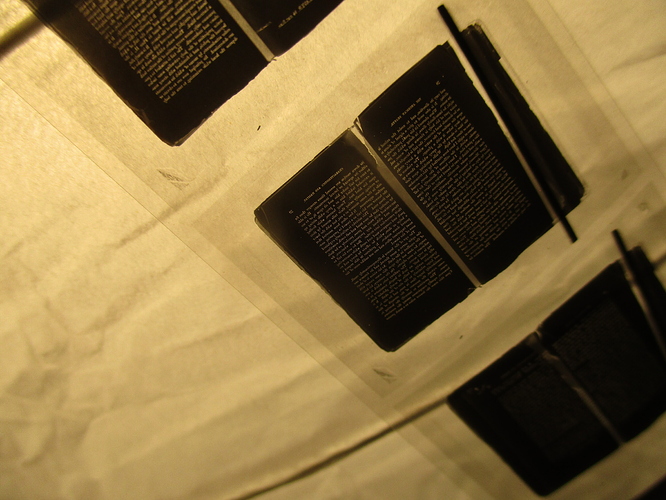 Looking good! Cool to hear that CHDK is working well.

Blockquote DSLR/DSLMs are hit or miss for tethered shooting outside the very high end.

Have you checked Digicamcontrol (DCC)?
I have used it with low range of Nikon (D3200) which has a 24 MP sensor. DCC already has a build in plug-in to communicate with arduino.
I am presently using with Arduino, and stepper motor for an 8/Super 8 scanner.
Check out DCC and if it works I can share the arduino code to get you started.

I, also have been planning on building a microfilm scanner(along with a kinograph) for the last few years. Our local newspaper has archived it’s collection on microfilm, but hasn’t ever digitized them. For like 10 years I’ve wanted to build or buy a microfilm scanner to do this, since I love learning about the history of our area (Grants Pass, OR). I’m looking forward to seeing and hopefully adding to the new ideas you guys have.

So… I got distracted by trying to repair a 3D printer, but was not able to tweak it into usable quality. I’ve since bought a new one, and as a first project, designed and printed a 35mm microfilm reel. Need to tweak the tolerances and add a snap fitting or threads to the top, but I’m thrilled it came out as nicely as it did. 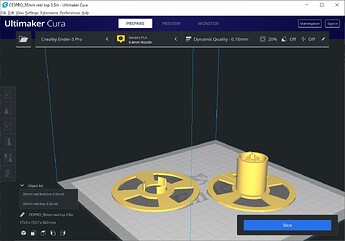 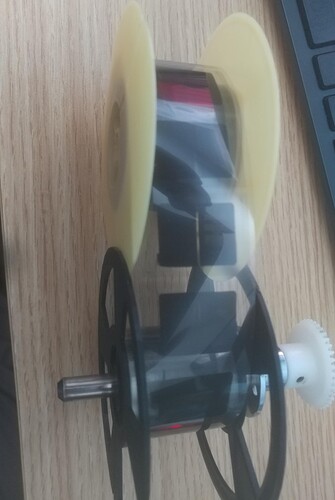