Based on this post, where I outline the build phases.

Here’s a video showing progress on this section. Would love your feedback! ANyone plan on building along with me?

PS - Captions have been added but are only available in English. If you speak another language and would like to translate these, please let me know and I will give you access. It would be a great service to everyone!

Awesome video Matthew, I love the spindle improvement. We are committed to the lazy susan mounts for our first build but will watch your progress closely.

We’ve cannibalized two of our non-functioning 16mm projectors but the gates aren’t hinged like your 35mm gate is. That seems like an ideal solution.

Here is what our 16mm gate currently looks like. 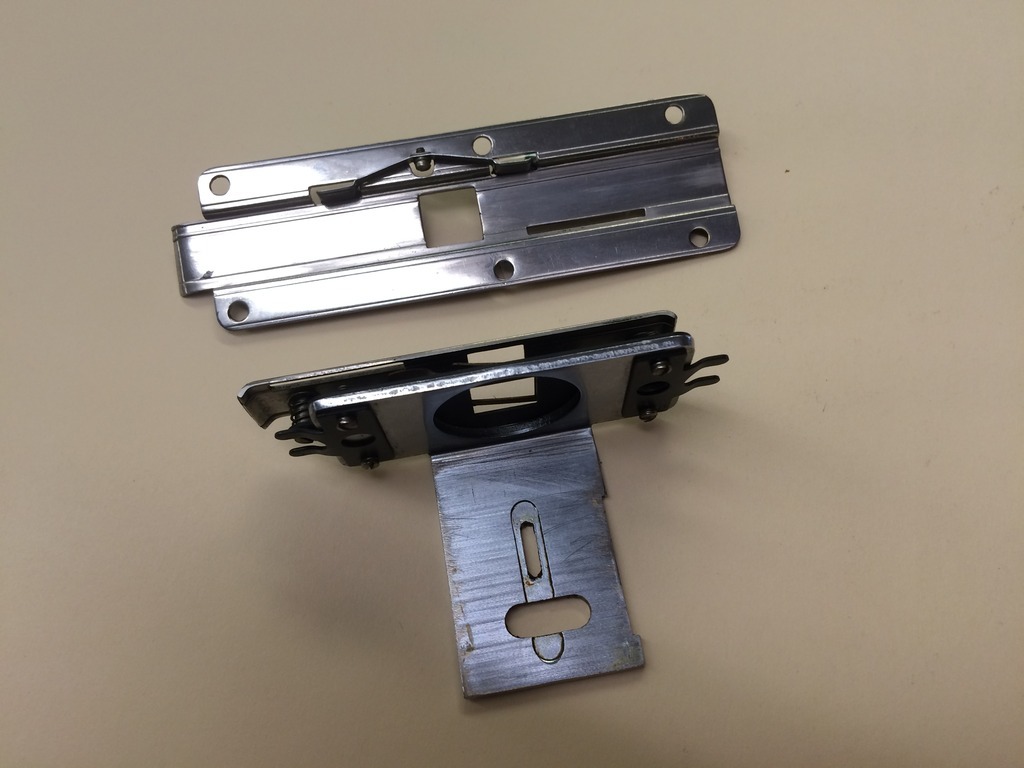 Matthew, hopefully you’ll take this as constructive criticism. Also realize, I’m not a professional in any of this, and these are just by thoughts based on the limited knowledge I have.

I’d like to understand more about why you’ve chosen to have the reels lay horizontally than vertically. I believe this is leading to more expense and potential risk of failure due to the bearings.

The bearings you’ve chosen, I believe are actually pillow bearings, but may indeed be a needle bearing internally. Either way, mounting them as you’ve done doesn’t seem to fit with their design intent. I think they are only really meant to support radial loads vs axial ones.

In addition to potentially using the wrong type of bearing, it’s also increasing cost because you need one on each side of the platform. There are tapered bearings that can support both axial and radial loads. Mounting the reel/plate on one of these could allow you to use only a single bearing and you wouldn’t risk popping the bearing apart by putting axial load on a bearing that wasn’t meant to bear it.

Alternatively, there’s many other types of bearings that have extensions of the inner raceway to accommodate attaching it to a shaft, and the shaft could be held by either a set screw or eccentricity depending on the bearing selected. Maybe even a flanged bearing could work, though I think the flange is really only meant to help with alignment, not support axial loads.

Now, if you were to place the reels vertically, you could probably reduce cost further because you could use just a common radial bearing, as there would be negligible friction in the axial direction.

Take a look at bocabearings.com. We may be able to find cheaper sites, but they have a good selection, nice diagrams, and good explanations for each bearing type.

There’s also some interesting bearings like the U-channel ones, the rubberized ones (mentioned as having uses in paper handling), etc. I’d think for Kinograph we could use the cheaper bearings as we won’t be getting into the high-heat, high-speed, or chemical resistivity that the various ceramic, stainless, and rubber-shielded bearings are meant for.

This is exactly what I need, @digitap!! I am an amateur so your input is very valuable.

As for horizontal vs. vertically - it was initially a materials cost choice. Building the supports for a vertical system just seemed more expensive. But that was a long time ago. It also seemed easier to mount the camera in a horizontal way since it was easier to maneuver a DSLR in that orientation.

But I see your point re: bearings. The reason for 2 was for stability. More “cylindrical” enforcement of the shaft orientation. As per your point:

Alternatively, there’s many other types of bearings that have extensions of the inner raceway to accommodate attaching it to a shaft,

What are those called? Do you have any links?

Also, I’m a bit confused so I’m going to summarize what I think you’re suggesting - can you please verify?

1 - tapered bearings will work for horiz. and vertical orientation
2 - find ones with sleeves to support the shaft, in either orientation
3 - if vertical, could use a common radial bearing

is that correct?
Happy to buy and test any suggestions but direct links to the types of parts you are describing will save me tons of time (which is limited with my schedule). Thanks so much! This is all wonderful.

I looked for tapered roller bearings with an 8mm inner diameter and had a hard time finding anything. It seems these are generally made for larger diameter shafts. Is that true?

There’s also some interesting bearings like the U-channel ones, the rubberized ones (mentioned as having uses in paper handling), etc

any links for these either?

I found collar ball bearings, which seem to be radial ball bearings with an added collar. McMaster does not carry one with an 8mm inner diameter. link: http://www.mcmaster.com/#set-screw-collar-ball-bearings/=11e6osp 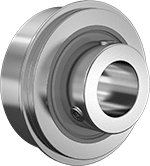 Seems like these thrust bearings would be a cheaper option - but how would I mount them? 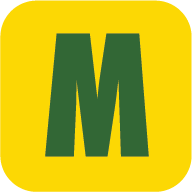 McMaster-Carr is the complete source for your plant with over 595,000 products. 98% of products ordered ship from stock and deliver same or next day.

Most of the collar options I’m seeing are more expensive than what I already have. The thrust bearings above are much much cheaper, but no support for the shaft to maintain it orientation (horiz or vertical).

Any guidance and advice is welcome!

I’d stay away from

1 - tapered bearings will work for horiz. and vertical orientation2 - find ones with sleeves to support the shaft, in either orientation3 - if vertical, could use a common radial bearing

Yep, that’s right for the most part. My understanding is that the collar bearings really aren’t for axial load, either. The collar is just to help join the shaft to the inner race.

My suggestion would be that if you want to maintain the horizontal orientation of the reels, you’d want to use a tapered bearing, OR use a combination of a thrust bearing (to support the weight of the reel) plus radial bearings (to provide smooth rotation of the shaft).

I would think the reel would simply sit on top of the thrust bearing (or make a plate that sits on the thrust bearing and the reel sits on the plate). The shaft could then fit inside one or more radial bearings. The two radial bearings could be spaced farther apart than just on opposite sides of the platform. Separating them by a couple of inches would probably help add strength to the shaft to help prevent it from bending. I don’t think it’ll be too big a deal because you’re not talking a lot of weight way out on the end of the shaft. The only trick will be how to support the end of the shaft so it can’t slide out of the bearing. I could see using another, smaller thrust bearing, or maybe even just an oil-filled or plastic bushing.

At any rate, it seems that by going nearly vertical with the reels lessens the actual axial loads on the shaft and would make mounting more simple. Even if you used a bushing to prevent the shaft from moving, at least it’s not having the full weight of the shaft plus reel pushing on it. If you stick with horizontal, we might be able to devise a mount that lets the shaft plus the reel put all its weight on one thrust bearing. In that case, you’d probably attach the reel platform to the shaft itself, then allow the end of the shaft to sit on the thrust bearing. You could then use a couple radial bearings spaced out to prevent the shaft from wobbling and allow smooth rotation.

I think that makes sense, but I’m still not entirely sure I understand how things would mount. Any drawings, images, or links would be helpful. Remember I’m not very familiar with how this stuff is normally done. I’m just hacking my way through as best I can!

In the meantime, I’ll order a couple 8mm thrust bearings so the reel isn’t sitting directly on top of the bearings I have in there right now. I’ll be ordering these: http://www.mcmaster.com/#standard-rolling-element-thrust-bearings/=11e9x06

Here’s what I was thinking if you wanted to do a horizontal orientation like the original Kinograph. Not by any means the only solution, though. The original lazy susan mount is essentially the same thing as a thrust bearing, since it supports weight in the axial direction. If the shaft must pass through all the supporting platforms, then I was thinking you support the shaft itself via the collar with set-screw. Then the collar sits on the thrust bearing. The film reel platform and film reel then sit on the collar. With the shaft supported by radial bearings far apart, it should keep it fairly well aligned and less subject to wobbling. Maybe with some brainstorming and iterations, we could improve on this.

The other option would be to use a vertical orientation of the reels like a true movie projector. That should eliminate the need for a thrust bearing and all that. 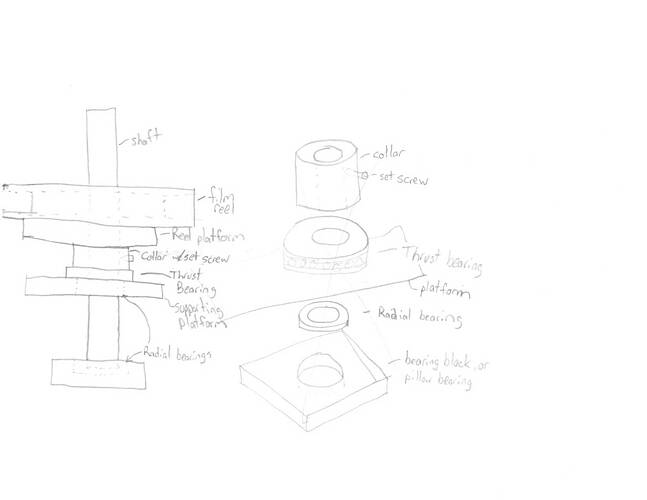 If you could get hold of a used spindle from a metal mill, that would work great. It is designed to handle stress in all directions. Good quality tapered bearings are expensive for them, so if you go that way, make sure they’re good.

@digitap thanks for the drawings. That helped immensely. THat makes a lot of sense and I see why you would want the radial bearings separated from the support platform. My question is - what keeps the shaft from wobbling around inside the hold drilled through the support platform?

@Maker good suggestion. Why add bearings when the motor already has some to offer? Well - I’m going to be trying to minimize the footprint of the motor, meaning a smaller motor and that may not be able to handle the weight of a full 35mm reel. Your suggestion is a good one, though and could come in handy for variations on this Kinograph build.

Matthew, the platform and the end of the shaft would both have standard Radial bearings in them to hold the shafts steady

OK - I did a quick rig today based on your drawings and now fully understand it. You’re right - it’s cheaper, actually seems a bit sturdier too. I didn’t have the thrust bearings for the shaft size you see in the photo so those aren’t pictured. Does this look right to you?

Great suggestion. Glad I was able to test it with stuff I had on-hand. I think I will incorporate this into the spindle design and post the results.

Quick pic of progress. The film path and placement of gate are TEMPORARY. Just there to get something moving so I can test motor torque, etc. I wanted to include different types of rollers, as many as I could fit, and get a feel for how much friction could be in the system.

We will get to film path soon so don’t worry - this isn’t the real thing. 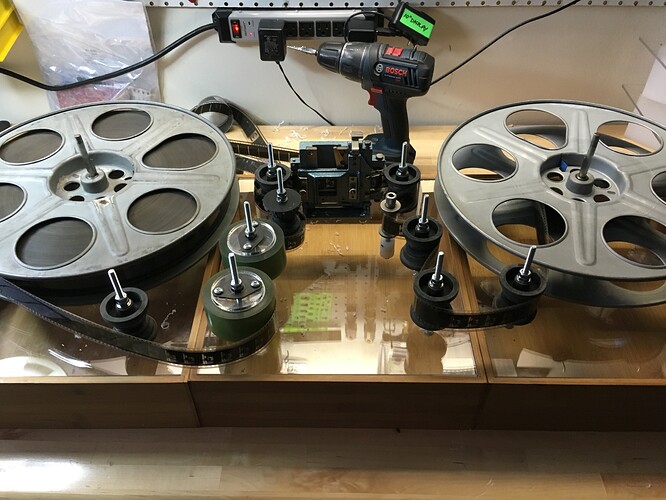 @digitap I’d like to try building a vertical solution. What kind of bearings do you recommend for that, exactly? Here’s what you recommended earlier:

Now, if you were to place the reels vertically, you could probably reduce cost further because you could use just a common radial bearing, as there would be negligible friction in the axial direction.

Is that basically the setup that I posted pictures of, with the two radial bearings offset by standoffs? A full 35mm reel is pretty heavy (up to ~15lbs), will a simple radial bearing be enough support? Or is this a case where the double needle bearings might be a better option?

Thanks for any guidance,