I’m currently in the process of building my own 35 mm-scanner from an existing projector. Here are a few specs:

The build is in an early stage so far, but I already managed to capture some first shots. They’re over-exposed due to some wrong Gamma-settings, but I was very happy with them for a first start though:

The next step is to get the sensor triggered so it knows when a frame is in front of the lens and when it has to take a picture. I’m using a Honeywell SS443A Hall Effect Sensor and a Neodymium-magnet, but I’m currently a bit lost with how to connect it.

This is what the Installation Guide says:

Can anyone here please help me to get it connected the correct way?

You will need three wires to connect to the GPIO cable. Vcc (power from the sensor circuit), GND, and the output of the hall effect sensor that will go HIGH whenever you want the camera to be triggered.

Note, if the camera is powered via the USB cable, you do NOT need the VCC wire.

I haven’t done this yet myself, but this is my best guess after taking a look at the image you posted.

It also seems like you need a resistor according to this page, specifically a 1K. It should (I think?) go in between the brown wire and your circuit’s GND connection.

Hopefully someone smarter will correct me if I’m wrong.

Thanks for your reply, Matthew!

The camera itself is powered through USB, but I’m not sure about the sensor. If I’m getting this right there are only 3.3 V that go through the red cable, but according to these specs for the sensor it needs 3.8 V to work. Or am I mixing something up here?

I believe that Matt has it right that a pull-up resistor is required on the sensor output; power and ground connected too.
The SS443A is a unipolar sensor with an open collector output. All of the typical circuits shown in the spec sheet have a pull-up; that’s the way open collector outputs work. From what I could determine on the camera specs (not at all familiar with Flir) inputs also require pull-ups. You only need a pull-up in one place. A 1K seems to be the suggested. I assume there is some configuration process for the camera where it is set to use a specific input as the shutter trigger.

OK, so I need to connect the green, brown and red cables to the SS443A and a 1K pullup-resistor has to be put between the brown cable (ground) and the SS443A?

As for the configuration process: There are options for this in SpinView. Here’s the window for GPIO:

And the possible settings are:

The settings written italic are the options I’d assume would be correct for the setup. I just have no clue about what to set for Trigger Activation.

As for the Line-settings they can be set for each line individually if I’m getting it right. But I don’t know what exactly would be the correct setting for each line.

Maybe somone knows about this as well? If it helps - here’s the technical reference for the camera: https://console.box.lenovo.com/l/T5oULH

S0rry for the late reply @Doc. Hope you’ve been able to get something working. In case you haven’t, I drew up a sketch of how things could be connected, with two different options. Take into consideration that I’m usually wrong about these things until I try it, fail, and try something new

As for the software settings, maybe ask @johnarthurkelly if he can document what settings he has used successfully in the past. 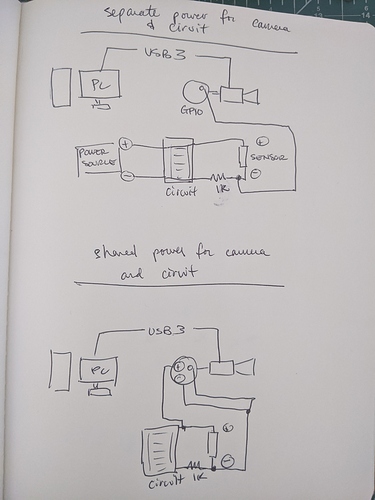 No problem, haven’t done anything yet, so it’s not too late for further suggestions.

Thanks for the sketch! I’d say using the power from the camera for the sensor as well would be my prefered version. Unfortunately I’m really bad with everything that has to do something with physics, so I have to ask again if I got this correctly:

This is from the sensor’s datasheet:

So (from left to right) the pins on the sensor should be connected with the brown, the red and the green wire if your theory is correct? And the pullup-resistor has to be put between the brown connection as you mentioned before?

My only fear that keeps me from just trying it out is that I don’t want to damage the camera with over-voltage or something, so sorry that I’m asking so many questions.

@Doc That’s a pretty great projector to be using, I always love working with them.

I’m not sure of your sensor set-up and if that will work or not but if you can get a pulse on the input, these are the setting I use to make SpinView capture frames.

If your using the Red wire, on the pin-out diagram that is listed as Line 2 which is what you need to set in SpinView. To set up the input you use Line Selector and select Line2. Then you set the Line Mode to Input.
Then the Trigger Source is set to Line2, and Trigger Activation, I use RisingEdge so it triggers at the start of the pulse I give it.

To set up the capture you should set Trigger Source to Line2, Trigger Selector to Frame Start, and Trigger Mode to On. Then the capturing needs to be done in the Record pop-up menu.

I hope that makes sense and helps you out.

Thanks for that information about the settings in SpinView @The_Projectionist!
That should indeed be very helpful.

Does anything have to be set for “Line Source” as well or can that stay “Off”? And does there also have to be a setting for Line 3 (the green wire) to get the SS443A powered (Line Mode to “Output” or anything) or can it just stay as it is by default?

I think the Line Source outputs are just logic type outputs @Doc
As for power out of the camera, I’m not sure. I’m running the camera trigger and sensors through an arduino.

Sorry for the late reply - just too many things going on right now, hence why I also haven’t manage to try anything new on the scanner-project.

I’ll let you know when I’ve been able to do some testing, I just hope there’ll be nothing wrong that breaks the camera.

This is the wiring diagram I sent to Doc:

“Idiot level” for people that have never seen an electrical schematic, but more importantly practical.

I think @matthewepler had the 1k Ohm resistor on the wrong wire. Of course it won’t hurt to put a resistor on the GND wire whether you really need it or not. I would tape it as shown to a small block of wood, or a piece of lego, something like that so you can move it around and find the optimal distance from the magnet, and then once you’ve found it you can glue it into place. I don’t think you want to move the magnet, I think that would go on the outside of the rotating gear and you move the hall effect sensor to the sweet spot.

Thanks for sharing! This will help other folks using the GPIO cable too. And yeah, I probably got it wrong. I usually do

You can solder straight to camera pins, but if you have a plug like in the diagram it would be more optimal. For example it makes it more modular such that if/when Doc’s group decide to build a 16mm scanner as well then they’ll want to be able to move their camera from one unit to the other easily.

Oh the other correction, Doc was confused by the circuit diagram on page 2:

So just to explain this - a circuit diagram doesn’t necessarily show pinout in the correct order. In fact sometimes you’ll see a big chip with all the pins labelled in what will look like a random archaic fashion, but this is to simplify the circuit diagram - for example they’ll put GND and +Vcc pins next to each other especially if they’re externally connected, or if they’re internally connected as is the case above. For example: 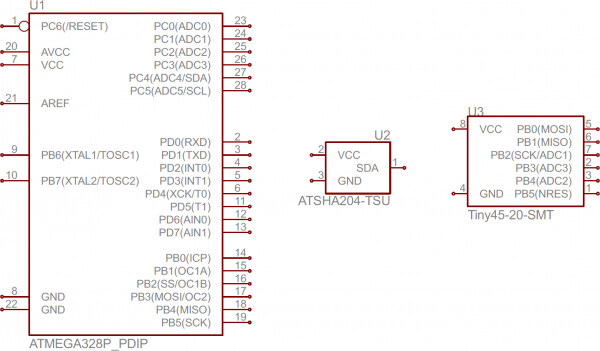 As you can see in those diagrams the pins are not in the physical order they would be found on a real chip. So in the case of the hall-effect sensor the correct order is shown here (from page 6 of the specs PDF with notation): 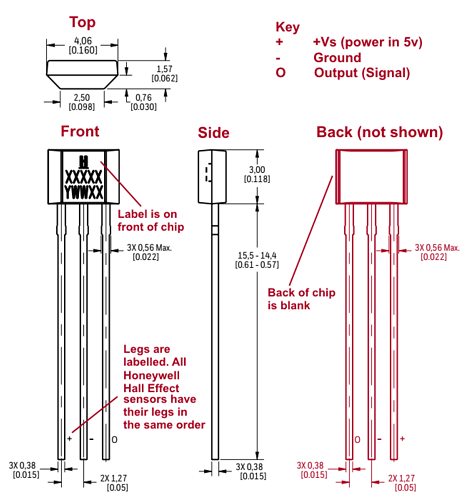 The naming conventions are a little odd, but do note that the Key I included is on page 2 of the PDF (the circuit diagram Doc posted) so there can really be no confusion. Also the legs will follow a common standard, so I’m sure if I was to look at other brand hall effect sensors they would be in the same order as this one (Input, Ground, Output) and I/G/O appears to be a common standard for three leg chips like say a standard voltage regulator chip. You can tell the front and the back apart by the fact that the front has a label on it, as is shown in the diagram, I’ve drawn in how the back would look but specification documents are never going to bother including the reverse of a chip because that’s just duplicating information you already have.

Sorry for the late reply, it’s been a while. But thanks to the suggestions from @matthewepler, @The_Projectionist and @filmkeeper the trigger is now working.

Now the next step would be attaching the opal glass-diffusor and getting the settings etc. adjusted. And then there’s also the problem with the blurred left edges on the audio track which still gives me some headaches. I hope closing the lens aperture a little will help to get rid of this. Did someone here have a similar issue in the past and maybe knows what could be the cause of this?

Out of curiosity and for my own education, what ended up being the correct wiring?

I used filmkeepers drawing as a template for the connections.