Hi thought i would show some more what i have been working on whit my design. 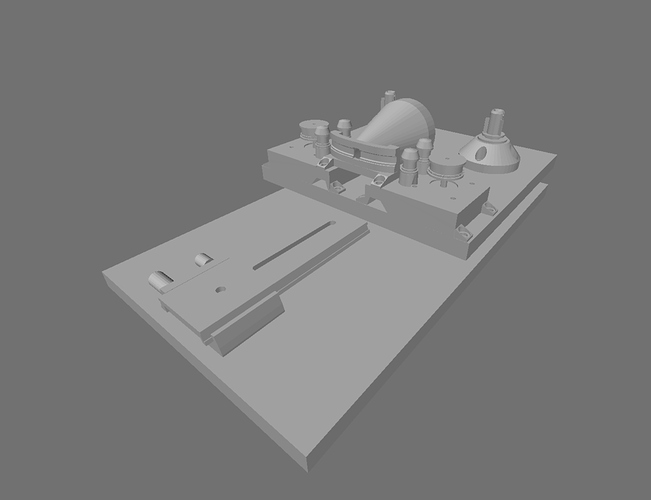 Wow great progress already! WIll the green color of the gate affect the color of the scan?
Love the simplicity of the build.

Thanks, the simplisity is kind of my priorety my idea is something very simpel but still not bad, this version will enable me to see where i need to refine.

My hopes is a machine that will a low number of 3d printed parts and then off the shelf cheap components so that any one could build it qhit out to much problems.

This is only a prototype, the final version will not be transparent either made from a n opace resin or painted,

sorry for spelling it’s 4am here

Very nice work. I’m impressed with the 3d printed sprockets; are they SLA printed? Are you able to say which (model) printer was used? Thanks.

Thanks and it’s a creality ld-002r, i have printed both 8mm and Super 8mm sprokets, they are printed so that they are interchangeble on the 5mm axel of a stepper motor.

Nice prints, this is printed in tough resin? I printed some test sprockets on a Prusa i3 Mk2.5 with a 0.25mm nozzle for S8 film. Once properly scaled, they did fit. However when I found a metal sprocket with a 6mm bore I quit that work, because I did not have a SLA printer to create sharper smaller teeth. Good to see somebody experimenting with SLA sprockets! looking for a

These are prototyped in a standard water washabul resin, the sprokets are made threw a simpel circumference calculation based on both the 8mm and the super 8mm sprokets to get the theoretical size and then i did 8 prints where i shrunk the diameter by 0.5% each time untill i got the perfect fit.

I think most of the parts apart from sproket would be workabul on a FDM printer but sproket would probobly requier a SLA printer for the realy fine funktioning stuff, i’m still learning but so far i’m doing well i think.

@MrCapri, I’m loving your build! The fact that you made so much of it from 3D-printed parts is great. Unfortunately, I don’t have access to a 3D printer for my own build.

Regarding your difficulties getting the camera firmly in line with the frames on the film: Maybe a vertical setup with the camera facing down could solve this issue. Given that with extension the lenses for capturing 8mm are fairly long, cameras more naturally face straight down because you can eliminate the leverage the lens has in a horizontal setup. Facing the camera downward seems to work great for my Raspberry Pi HQ Camera, but I’ve also found it to be the “much-easier-to-get-straight-and-stay-there” orientation when scanning 35mm stills film with a heavy DSLR.

But there are also some great scanners, both professional (Filmfabriek HDS+) and on this forum (build by @cpixip), that use horizontal setups and look plenty sturdy.

Thanks for the sugestion, i’m not sure it would work on my build sence a large part of the idea is size spesific i want it to be small enugh to fit in a drawer or box stowed away and not take up much room.

I’m working on new prototype components that i’m hoping to print tomorrow that should have tighter tolerances and give better abuility to focus whit a rear mounted setting screw instead of the sidemounted one.

I do realise not everyone who might want to duplicate in whole or part might not have acses to the printer or want to deal whit that, ones it’s done i should be able to make a kit of the 3d printed parts and ship them of at near cost as long as i dont lose money on it but that is way of for now.

Some update on the Real drive/slack tention , lot’s of prototyping had to be delayed becase my refriderator/frezer died… so it was a race aginest time to save about $400 worth of food covid left me unemplyed for the moment (probobly back to work in september fingers crossed) so it was food i litteraly could not aford to lose.

But here we go, i realy love this printer.

Base printed to fit a stepper motor, ballbearing pressed in to it whit a Super 8 realholder whit a fitted 5mm keyed hole perfect fit.

Not sure if the idea come across well, going to use a rubber band (donated from my GF) stretched out in kinda of 8 shape to keep tension on the outgoing real.

@MrCapri I really like the design of your film gate. Would you like to share the files for it? I would be very interested in looking into putting this or something similar on my own build.