This is a weird one, but when scanning an old (1977) Super 8 film, I seem to have come across what looks like small cracks all over the film. I’m not sure what it actually is. Maybe someone from the forum has seen this before and knows what it might be, or even better, how to fix it if that is even possible?

Initially I thought this to be dirt, so I ran the film through a microfibre cloth with a bit of film cleaner. This didn’t do anything with regards to the “cracks”. I may have been overly careful, though, because it also barely reduced dust and this was my first time actually physically cleaning a film. My best guess now is that we might be looking at cracks in the emulsion (which wouldn’t be fixable?). I read that reticulation as a result of strong temperature changes during development can cause such cracks, but I don’t think that this is the case here because, with the film being Kodachrome, I think it is safe to assume it was developed properly in a professional lab (all films from the same trip were stored in a Kodak return box).

Here is a scanned frame that shows the effect I mean. You might have view the image in full to see it properly.

It’s possibly fungus. You may be able to clean it off with some film cleaner, but it’s a labourious job. I have plenty of fungus on many of my films because, before I got them, they were stored in a humid environment in film cans with no air holes.

the AviSynth script will help you in post processing

So far I have digitized many meters and many reels of Super8 film and in none of them have I come to see defects of this type.

Specifically, Kodachrome films over 40 years old, remain in perfect condition, with only dust and some textile fibers attached, but without fungi and perfectly preserving colors.

In films from other brands I have seen fungal stains, some unusable except cleaning, but these stains do not resemble those shown.

More common is the appearance of unwanted color casts, which must be corrected in the post-processing. I’ve seen movies that every few frames alternately have a green cast and then a red cast, making color restoration extremely difficult.

Yes I see these cracks very often, even on film that looks in excellent condition.

I found the light source on my scanner was quite direct, which made the cracks show up a lot more.

Using an integrating sphere like others on here have done work wonders to reduce the visibility of these cracks.

First of all, as AndyW says, the lighting has an important influence on the visibility of the cracks. A direct lighting or with a diffuser far from the film increases their visibility. A diffuser close to the film decreases their visibility. but can cause a loss of sharpness. You have to find a good compromise. In my case I use a 1,5mm thick plastic piece placed at about 5mm from the film. The integrating sphere is in theory the best solution but a bit more complicated to implement.
Then as dan74 said, a post processing in avisynth can also correct them to some extent.
Finally we can also think about a simplified homemade wetgate, the film is passed through a microfiber cloth soaked in a paraffin/petrol mixture (this is an idea from videofred) and it gives good results. See a description in my yart project

First of all thank you all very much for your helpful answers!

I was originally hoping to fix this issue at the source. If it is actually cracks in the emulsion, both changing the diffusion and the wetgate sound like a great ideas to try. I haven’t tried either so far because I didn’t (until now) have issues with scratches, which I mainly considered these for. Also there really isn’t much space left on my machine

If what I see in my frame is fungus, that might explain why it didn’t come off easily with the film cleaner. I seem to remember an older thread on this forum where the solution to removing fungus was a more thorough cleaning of the problematic film section with distilled water. The fungus in that case looked very different, though.

It seems the most practical solution is to try and remove the “cracks” in post (and rely on that they are anyway much less visible in a moving picture). I had actually done this before and you can see the result (before & after) below. It’s quite good actually, but not entirely gone, which is why I had hoped to fix the problem at an earlier stage in the process. That said, the result is absolutely usable.

I’m using a Mac, so using AviSynth wasn’t an option for me. I’ve been using Neat Video instead. If anyone would like try and do same using AviSynth, here is the original video file.
Note that I have actually done denoising and sharpening in addition to the dust and scratch removal (all in Neat Video). Also note that this is actually a scan made before cleaning the film. Rendering the new scan takes a while and I just didn’t have the time yet. 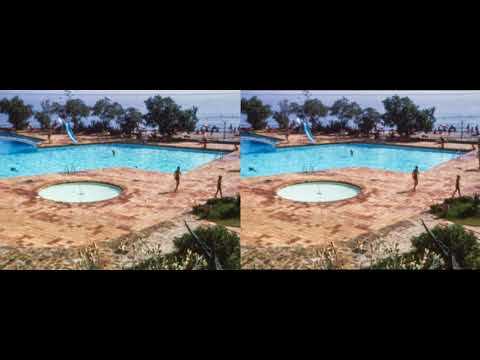 If what I see in my frame is fungus, that might explain why it didn’t come off easily with the film cleaner. I seem to remember an older thread on this forum where the solution to removing fungus was a more thorough cleaning of the problematic film section with distilled water. The fungus in that case looked very different, though.

You’re right, I encountered “fungus” a while ago with an AgfaChrome stock. And indeed, it looks very different, more organic, than the cracks you are noticing. Presumably it was caused by covering the Agfa stock with bee wax or something similar to let it run more smoothly through the projector. It also has the property to grow over time.

These cracks you are describing I have never seen in film stock so far. If they are indeed cracks, your best bet will be to use a proper integrating sphere. Not everything which sails under this name is actually acting as an integrating sphere - this requires that light is shining through the film from basically all directions possible, covering a complete half sphere. Also, the distance between sphere opening and film should be minimized as much as possible. Otherwise, you will loose the extreme angles coming from the light source.

Even better is to pair this approach with a wet gate. Basically, the cracks in the film are filled with fluid having the same or a very similiar index of refraction as the film stock. If that is the case, the wet film looks to your camera like a film without any cracks or scratches - if the cracks/scratches have not disturbed the original film layers.

Your cracks shift position from frame to frame - therefore, any temporal cleaner should be able to handle this. As your NEAT example shows, the cracks are gone after processing. Here’s an example using the “Automatic Dirt Removal”-tool from daVinci (frame 91) 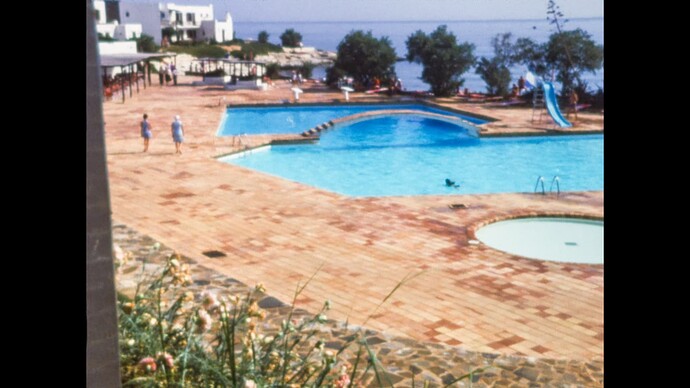 I had to reduce the “Dirt Size Thr.” down to 0.01, from the default of 0.1, in order to obtain this result. Temporal radius was two frames, motion estimation type “Better”, the remaining parameters were at their default settings.

Below is the video processed with the avisynth scripts of my restore project.
As indicated above by dan74, a simple RemoveDirt is enough to remove the cracks.
The video is an interesting case for denoising which must preserve the detail of the lines between the tiles of the pool edge.
https://vimeo.com/584288203
My restore project is a set of windows batch scripts to automate the restoration steps
https://github.com/dgalland/Restore.

So, I thought I would follow up on this. I have recently switched my diffusion from an old piece of ground glass to a sheet of PLEXIGLAS LED WH52 GT, a very similar setup to what is used on the Essential Film Holder for stills scanning. The main purpose of this upgrade was to fix uneven illumination, but I was positively surprised to see that the cracks have become virtually invisible as well. Some of you have already pointed this out above, but I must admit that I didn’t expect there to be that much of a difference, especially given that there is a fair bit of distance between my diffusion sheet and the film plane.

Below is the frame I’ve posted originally, now captured with the new diffusion and no digital processing done to remove noise or dirt. If there is a loss in sharpness, it’s not visible at the level of detail of the actual image on the film, yet the cracks are practically gone. 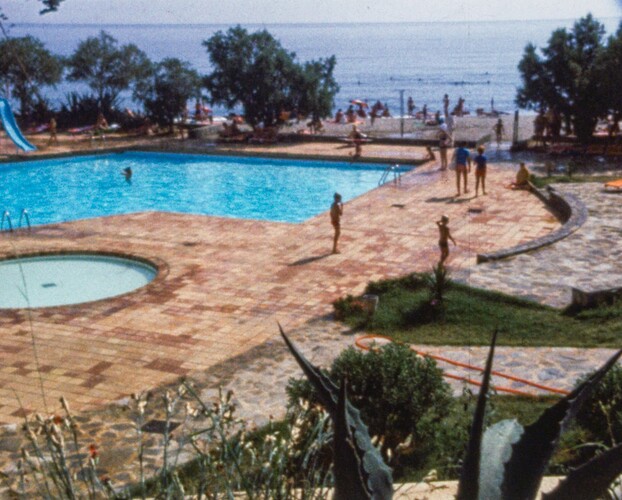 main purpose of this upgrade was to fix uneven illumination

I ended up using an oversized ping-pong ball as integrating sphere. Light makes a big difference in the image results.

Interesting experience.
What is the distance film-diffuser lamp-diffuser and which lamp do you use?
This plexiglass is quite thick 3mm , you did not lose too much light ? (because the lens must remain at a medium aperture)
In the article tomkyle's box · DIY Digitizing Box for Film Negatives I see:

Below you will find a photo of my setup for orientation.

I’m using a greenandco MR16 CRI90+ LED (200 Lumen) that slots in right where the original projector bulb was. The lens of this LED is a little recessed. I tried to estimate roughly where it is by the yellow line in the picture. From the lens of the LED it is roughly 1cm to the diffusor (red arrow) and then probably almost 3cm to the film plane, roughly indicated by the green line.

I am actually not losing too much light. When I started to put my machine together, I originally went with a Philips Master LED expertcolor that is supposed to give 420 lumen. With my old ground glass diffusion this turned out to be too bright. At a shutter speed of 1/2000s, an aperture of f4.7 and both gains at 1.0, the highlights were clearly blown out. The HQ Camera technically accepts faster shutter speeds, but the images did not seem to get darker when I set them, so I assume faster speeds are not really supported. I then switched to the weaker LED. At this point, I was able to just about resolve the highlights nicely at 1/2000s and the same settings everywhere else. Now, with the new diffusion, I get roughly the same brightness in the picture at 1/250s. So there is obviously less light, but I actually prefer that I now have a little more flexibility in terms of exposure. I usually keep the camera at these settings, though, and even when the film is slightly underexposed, the scan can usually be saved well enough by turning up the exposure of the RAW images in post.

Maybe one more word on the diffusion: I actually ordered the WH14, WH52 and WH72 variants of the PLEXIGLAS LED. I didn’t test the other two on the scanner, but from holding them up to light sources, the WH14 seems quite similar to WH52. The WH72 is visibly darker but also seems to diffuse more.

As @dgalland mentioned, you can order 100x75mm samples from the PLEXIGLAS website for just 3€ and free shipping. These are more than large enough for building a scanner, so it didn’t hurt to get all of them for testing.