Nice photos! I see you’ve mounted a fan - someone else with one of those cameras I think is attaching an actual heatsink to it - so if you have any noise issues don’t be afraid to experiment with more cooling. You should be able to get captures that are completely free from digital noise with that camera.

@robinojones What lens are you using in the setup? And what RGB chip is that?
It looks just like the 100W version of a 10W RGB LED module I found somewhere,
something like this? Epileds chips led 100 W RGB led module

That’s great to know - I’m really new to Python and OpenCV and I can’t find much examples out there. OpenCV doesn’t read raw files natively, have to use Numpy or something.

I don’t use python much for OpenCV, but the way OpenCV works in general is that images aren’t really images, they’re a kind of array (a MAT in OpenCV speak). You would need to get the image into a Mat, and then you can manipulate the pixel data directly. This makes things like debayering very fast. And you’re correct that for raw images, numpy is needed along with a few extra lines of code… https://newbedev.com/opencv-python-display-raw-image – this would probably need to be modified to avoid hitting the disk, if you can, which will speed things up. If you can get the data from the camera’s frame buffer somehow, you would pass that to numpy instead of sending it to the disk to read a file. Should speed things up a lot.

You can quickly copy mats to make duplicate images (so you’d read in your main image, then maybe copy that to a new mat that’s B/W to make it even faster for things like perf detection, then take the information you learned from that perf detection pass and apply it to main image. It takes a little practice to get the idea, but it’s incredibly powerful.

numpy is separate from OpenCV, but it allows you to do all kinds of math on the open cv mats, so it’s good to know if you’re going to work in python in general.

I had a heatsink on it with 2 fans mounted but removed it as it was not really improving things and it was vibrating camera, I found the external fan, pointing at camera keeps it at a constant 34c. The camera is mounted on an aluminum plate which is secured to the temp 3d printed Y stage dovetail.

What lens are you using in the setup?

Temporarily using Tokina 100mm 2.8 set to f5.6, final version will be using one of my printing Nikkor 105mm but might research something else so the camera doesn’t have to be so far from gate.

And what RGB chip is that?

It looks just like the 100W version of a 10W RGB LED module I found somewhere,
something like this? Epileds chips led 100 W RGB led module

Robin, have you posted your files for the lighting sphere and other bits and bobs that are part of your lighting unit? I’d like to try to re-create it and compare it to what i’m using.

Robin, have you posted your files for the lighting sphere and other bits and bobs that are part of your lighting unit? I’d like to try to re-create it and compare it to what i’m using.

I was planning on making a dedicated post for my light solution with schematics, parts, 3D Model and Arduino Code - so if anyone would like to participate in improving it would be great.

I should have everything posted this week.

In the meantime you can download the prototype model in .STEP below:

Edit: wanted to add, I printed it at 15% infill and coated the inside with Golden flat titanium white mixed with 10% barium sulfate powder.

I’m really interested in the RGB cob, and the potential for a driver made for it with the ability to strobe from a trigger input

@Andyw and anyone else interested - I just made a dedicated thread for the light system here:

Wanted to share my RobinoScan Strobe system. Hopefully it helps some of you and hopefully we can improve it with the community. It works using an Arduino Mega and the flashes are triggered very precisely to each exposure. There are things to improve but this currently works 100% on RobinoScan. If anyone builds it or improve on it please share your findings. The next step is overdriving the LEDs to get more light output. When strobing we can overdrive the LEDs because they are not constantly tu…

I was out of a camera for the last 3 weeks, had to do a RMA for an issue I was seeing - it’s not there anymore.

Designed a PCB to clear up the mess of hand-made boards and cables.

I went from this… 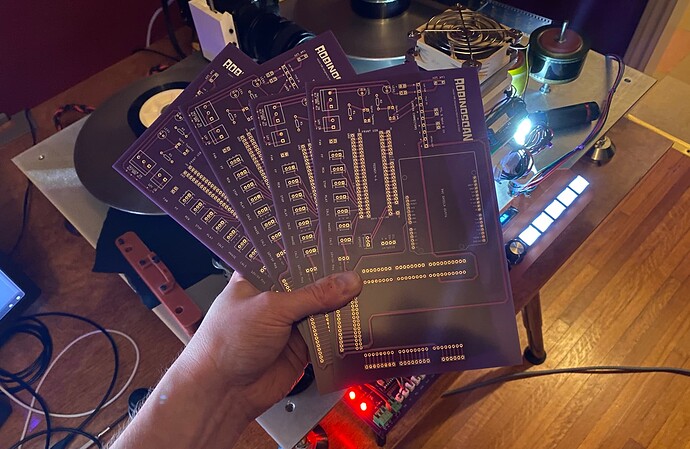 Here it is fully assembled. 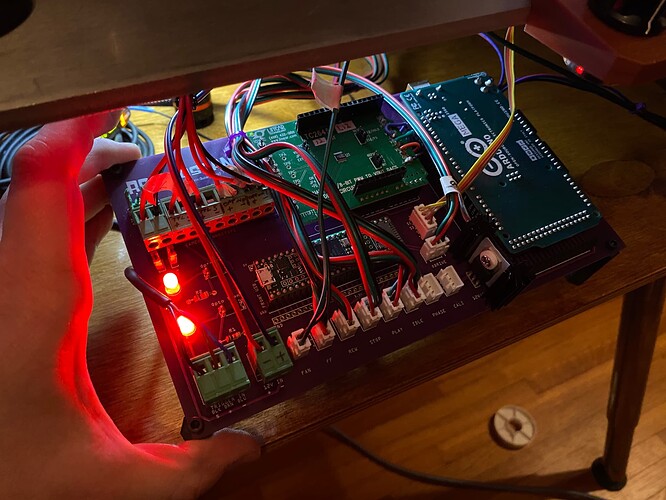 I added header pins around both microcontrollers so I can continue developing, and change things if needed - it’s very much an in-progress development board but I learned a lot doing this. The next version will be a lot cleaner and include the light system on the board. Drive and Camera are both powered with a single 24V PSU. Light is on its own PSU.

Next steps is refining the speed regulation code, it works well as is but I know it can be better. Then it’s calibrating the sensor and hopefully if everything clears out I will order the final frame and put the machine to good use.

This is so cool! Just found this place, and am deeply inspired by what you are doing. I have a 35mm cartoon that I want to scan so badly. How did you get into building this? Does it do sound too?

Welcome to the community - the film is “over-scanned” so the optical soundtrack image is captured with every frame. Audio can then be extracted with a software called AEOlight.

How did you get into building this?

Started with optical printer conversions and now aiming for real-time with this machine. The community has been extremely helpful and supportive. There are people here that are truly remarkable at what they do.