I want to invite people to share in this thread scan results of their Super-8 scanners, to give us some ideas on how different old film stock is performing, as well as how good a sensor/lens combination is performing on the large contrast classical color-reversal film is throwing at the hardware.

The focus should be on the unprocessed capture coming straight from the camera, not the end of a maybe elaborate and finely tuned post processing scheme. While there are already examples of scans of a SMPTE-Super-8 test film available here on the forum, I want to aim in this thread on real world examples. The SMPTE test film is not a color-reversal film, it’s resolution and density is in no way comparable to what is thrown at your scanner if you are digitizing old home movies.

For judging in a coarse way the resolution of the lens/camera combination, one can try to use a frame which includes some dirt. A simple way to do this is to use a frame near a cut between scenes.

So, here we go: first is an example of a Kodachrome 40 film, scanned with a combination of a see3cam CU135 and a Schneider Componon-S 50 mm. The film camera used was a Revue S10 deluxe, originally made by Chinon/Japan with a Zoom F 1:1.7 f = 6.5-65 mm lens. This specific film was developed more than a year after the initial exposure. Endured during that wait time freezing temperatures as well as temperatures above 40°C (don’t ask 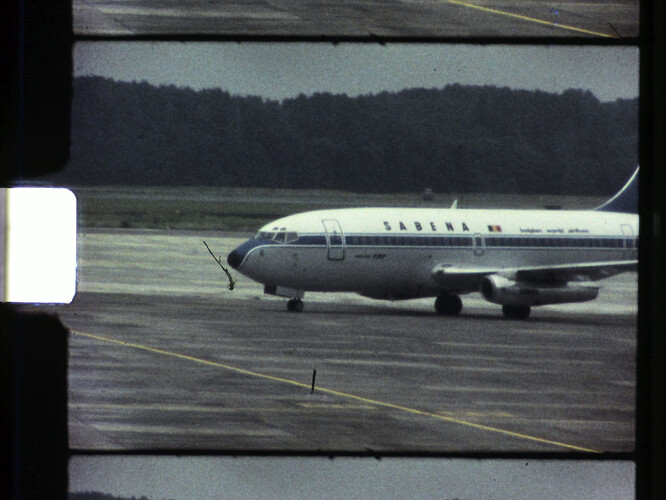 Same parameters as above, only filmed with a “Bauer C Royal 8E” and developed immediately after exposure: 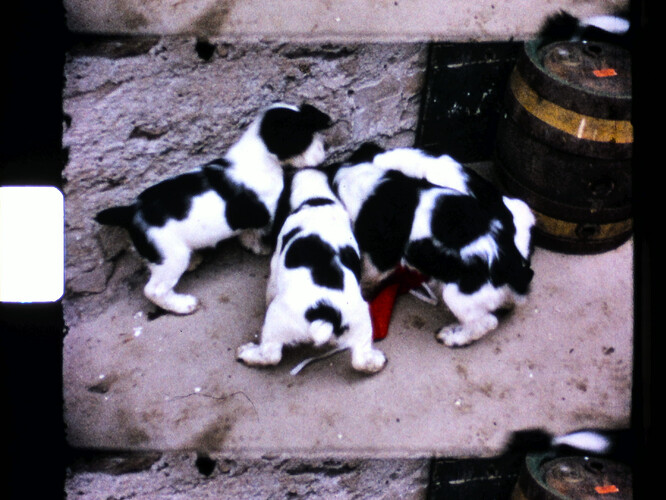 Here’s an example scanned again with the see3cam/Schneider combination, filmed with the Revue/Chinon camera, but this time, it’s Agfachrome 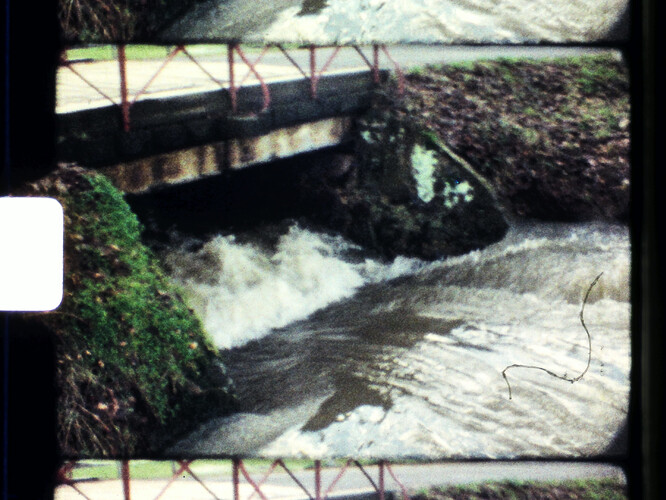 In contrast to the very first example above, the camera was here certainly operating at the largest f-stop possible, 1:1.7 and it shows in the sharpness of the original frame.

I think it would be interesting just to share other scan results, possibly, if available, with information about the film camera used, the scan camera/lens combination as well as other information available. The ideas is to build slowly a database of scan results which might help to design better systems, for example by showing minimal requirements as well as intrinsic limitations of the format. Super-8 color reversal film is probably one of the most challenging scanning situations, due to the small frame size and the huge dynamic range color-reversal film is showning.

By the way - in every frame I posted, there is some dust hiding, as promised, to judge the sensor/lens combination!

Now here’s a scan comparision without that luxury (simply could not find a frame with dirt). It’s between two different scan sensors, namely a Raspi HQ sensor vs. a lens-shading compensated Raspi v1-sensor. Both scans used the trusted Schneider Componon-S 50 mm, film stock is Agfachrome, camera the Revue/Chinon one. Here’s the scan result of the v1-sensor (original scan resolution only 1292x972 px): 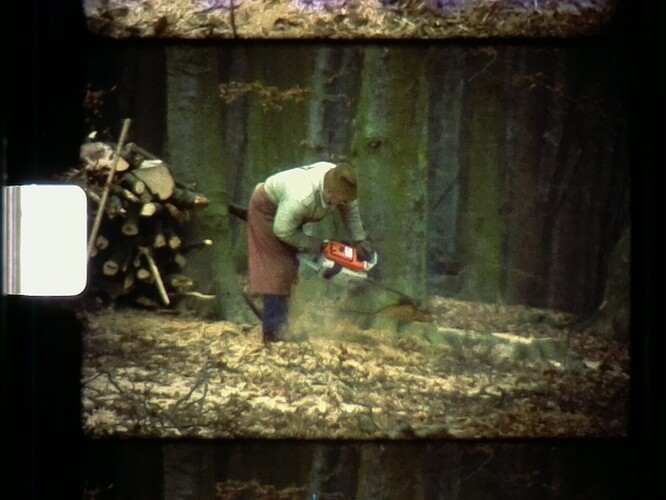 Here, for comparison, the same frame, but scanned with the Raspi HQ sensor. The scan resolution is much higher (2028x1520 px) 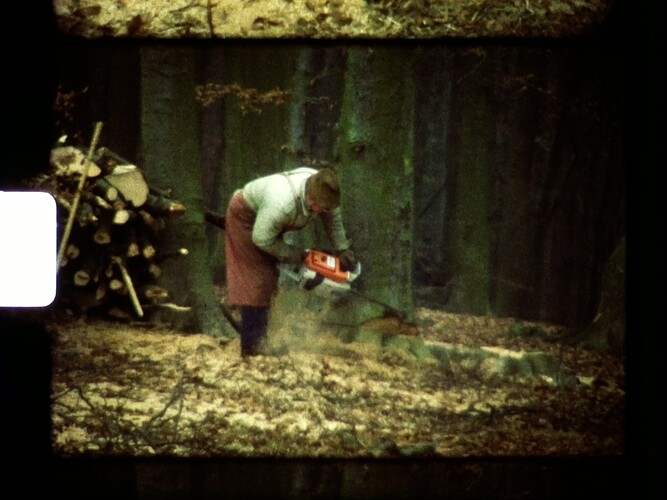 so we start to see the film grain, but the visual resolution seems to be worse. So what happened?

Well, let’s enlarge a part of the frame. Here’s the v1-version 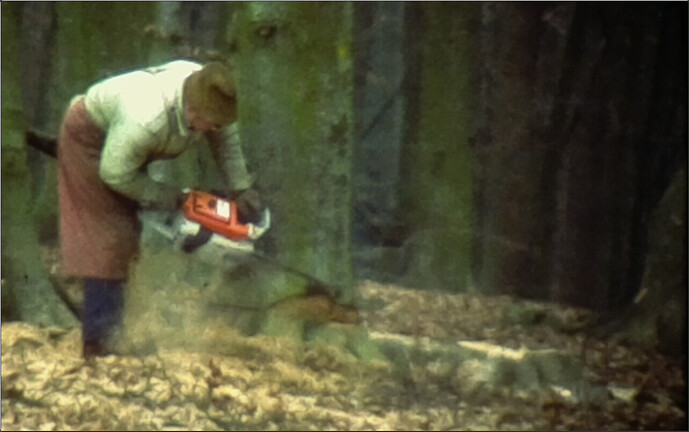 And now for the HQ version at the same resolution level: 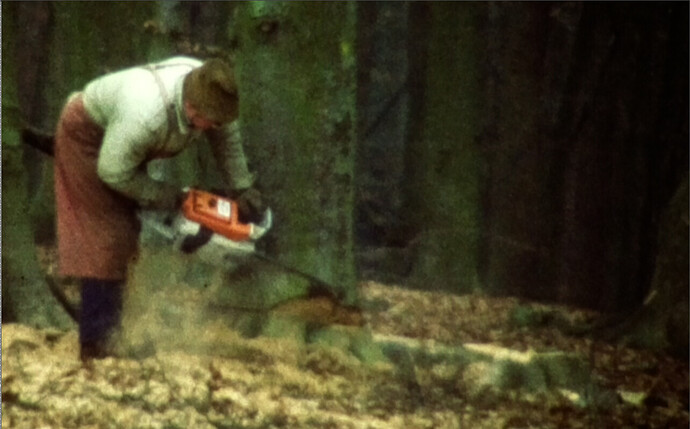 Well, the v1 sensor is a mobile camera sensor, while the HQ sensor is more geared towards cam corders. Like any mobile sensor, the v1 sensor actually employs (either already on the sensor, or during intial image processing) heavy noise cancelation and image sharpening techniques. In our scanning application, this gets rid of not only the sensor noise, but also of the film grain! And of course, the (adaptive) sharpening also helps with the visual appearance of image edges. If you compare both images closely, you will notice the patchy, plastic-like look of the v1 sensor - that is a sure indication of adaptive smoothing/sharpening.

The HQ sensor on the other hand is tuned differently, and shows happily the film grain. Sharpening is also applied here, but it is less noticable.

One point to be mentioned here: this issue here is most probably caused by the pipeline converting the raw sensor files into the jpgs stored on the disk. Most machine vision cameras are usually not designed to deliver “nice looking” images. Also, one can avoid such things by working directly with raw images. But: there is a tendency of utilizing image processing algorithms already on the sensor level. So your raw image migth not be as “raw” as you might image (for fun, just google: “nikon star eater”)

Coming back to the original topic: it would be great to see other examples of Super-8 scans here in this thread. Other film stock, other film cameras, other sensors, other lenses and various scan resolutions, to get an idea what is needed and how much is needed for a great result.

every example posted is the .jpg or .mjpeg as it came out of the camera. However, from the raw image to the jpg-outputs, usually a lot of image processing is taking place.

Generally, it is hard if impossible to obtain image data without “any processing”. Let’s try to get in incomplete list of things which happen with a normal capture:

Having noted all this, the captures above were taken with all “automatic” image processing steps switched off as much as possible and the processing values for the pipeline set to fixed, carefully chosen values.

Specifically, for the Raspi v1- and v2-camera, the picamera library was used for capturing, by using the video port as output. This port outputs a video stream composed of mjpegs. There is a second output port available with the Raspi cameras, the still port, which can used for still captures. Both ports deliver slightly different results. The documentation of the image processing pipeline used on the Raspberry Pi hardware is sparse - the Raspberry foundation cites routinely non-disclosure arguments. This image processing is happening on the GPU and it is closed source. Currently, there are efforts to introduce an alternative processing pipeline, “libcamera”, which is open source, but it is far from production ready. With my captures, I think I was able to switch off most automatic processes.

The see3cam is a cheap USB-3 machine vision camera, and the frames delivered via the USB-3 port are displayed as they are. The image processing pipeline converting the raw frames to the jpgs displayed is implemented in a secondary processor in the camera itself. This is a typical setup, found in many image processing cameras. Again, a real documentation of what is implemented and how is usually difficult to obtain.

To give you an idea of the difference between a jpg a camera delivers vs the raw image of a camera, here’s an example. This is a scan from a Kodachrome 40 film stock (1988), scanned with the Raspi HQ camera 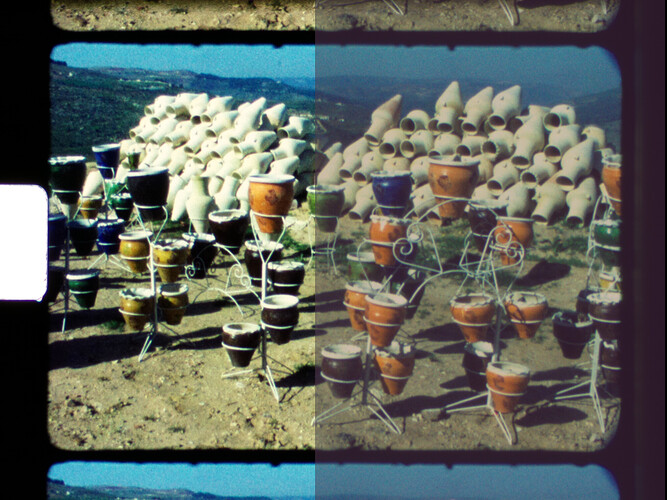 On the left side, you see the jpg delivered by the camera, on the right side, a visualisation of the raw image data of the same frame. The raw frame itself would have a heavy color cast and would look rather dark, so what is displayed on the right side is the raw image demosaiced, blacklevel adjusted, and white balanced. Finally, a gamma curve of 2.2 is applied to arrive at something which looks similar to the jpg the camera did deliver. But obviously, some additional sharpening and some more color manipulations are happening during jpg-creation.

So, to summarize this long reply to your short question: no, there is no post processing in any frame I posted above. This is how the data came directly out of the camera(s), asked to deliver jpgs with high quality settings. 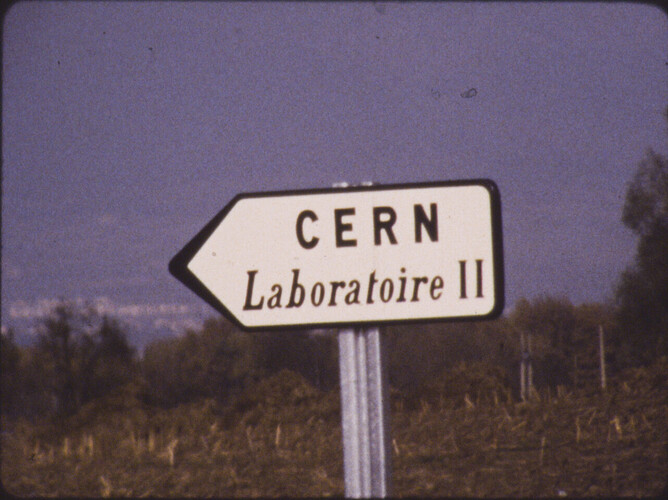 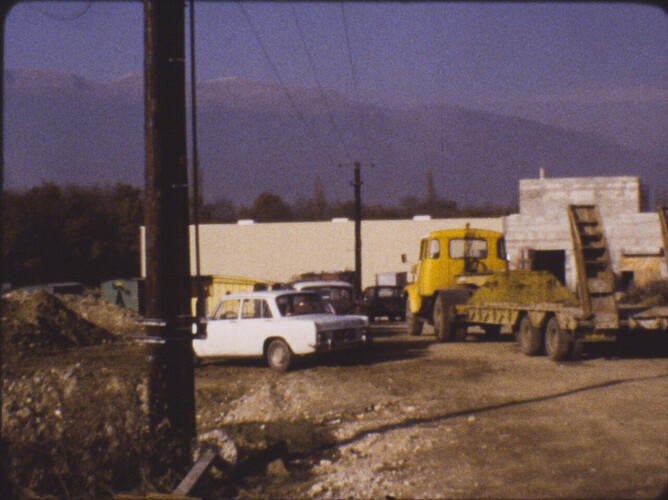 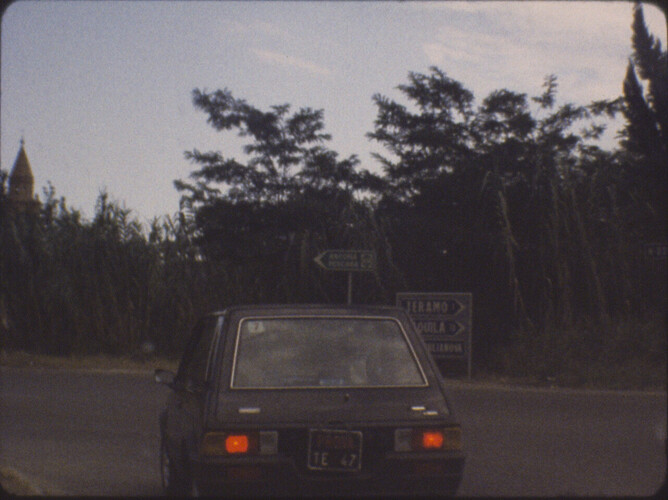 Here are samples, with the direct DNG and just the image desaturated (and with soft leveling). As I’m mostly doing B&W, I put an very expired Kodachrome I’ve shoot and processed in b&w negative, and a color negative home processed too (in 3 stages, DNG, inverted, white balanced (poor white led so no adjustment possible on capture) 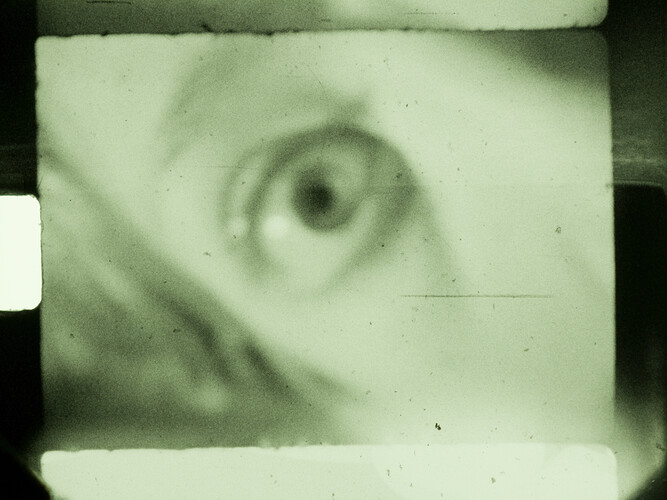 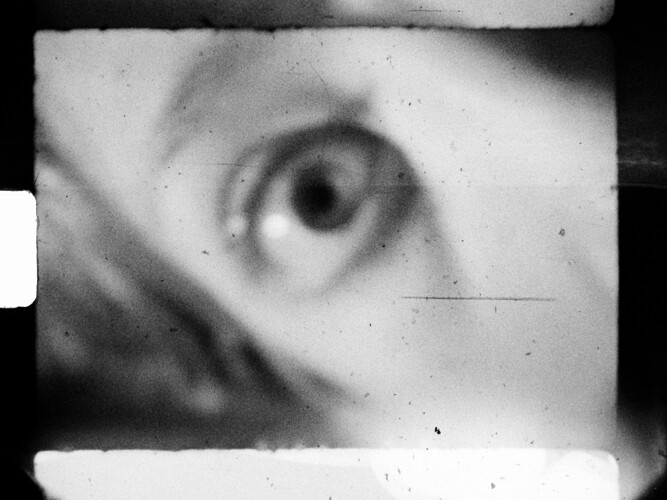 As the Eye is out of focus, I thought it was interesting to see the grain here. 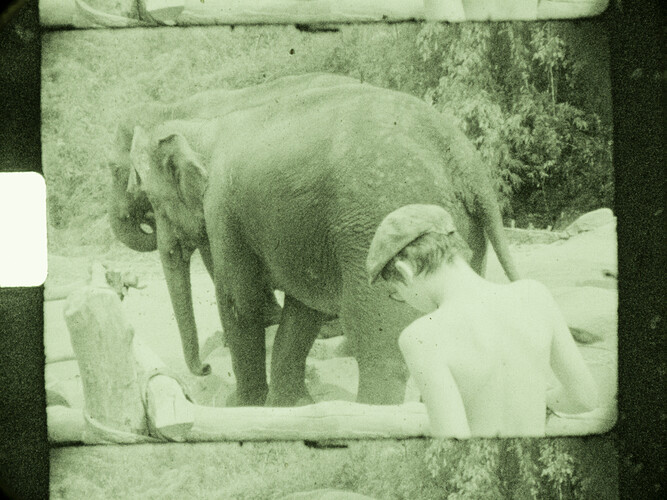 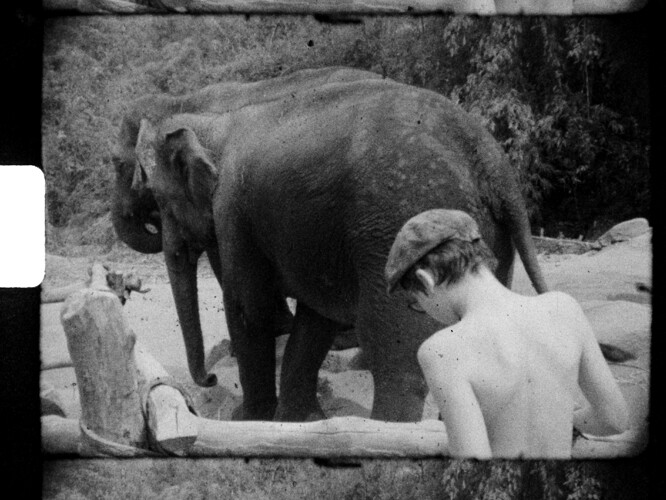 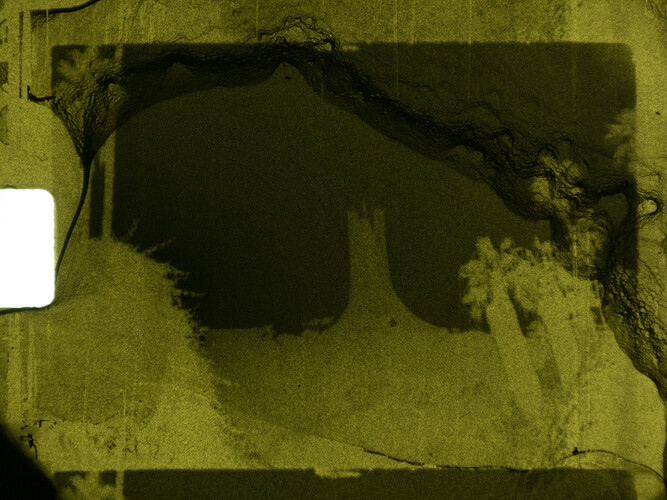 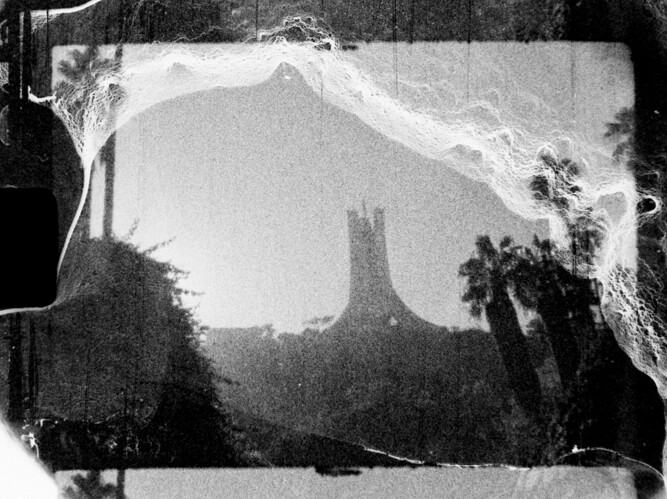 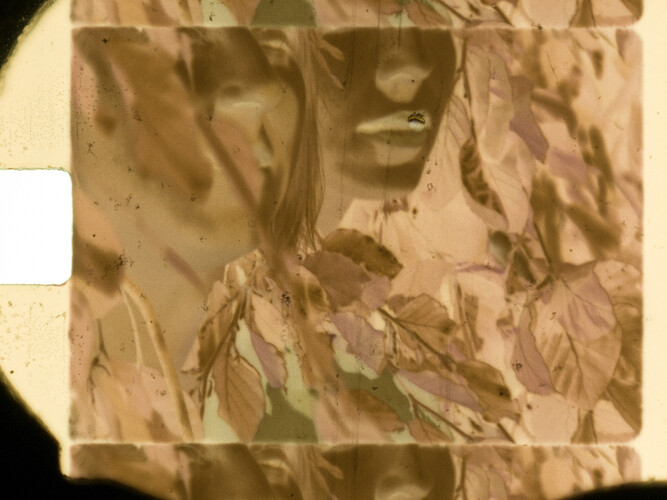 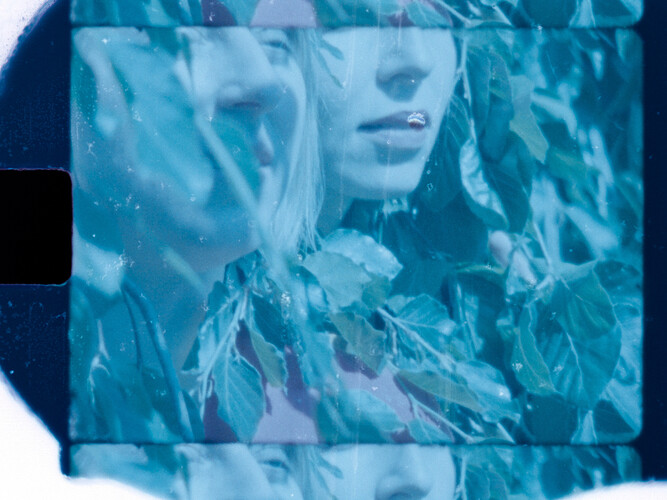 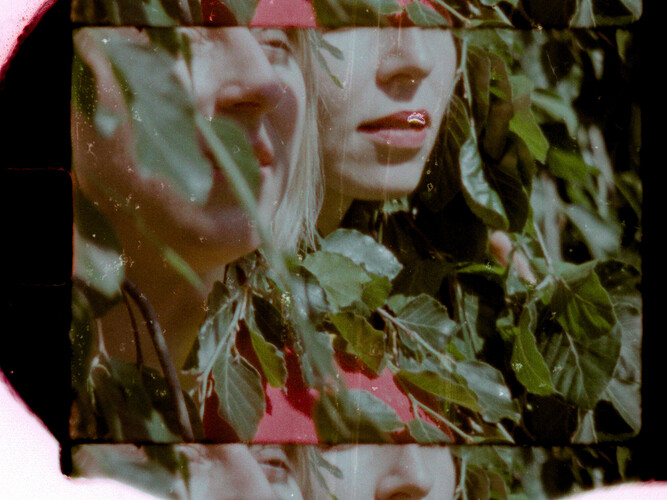 seems to me that the grain of Kodachrome color-reversal film is comparable between all the different scan setups, rather independent of what sensor/lens or scanning resolution was used.

With the Raspberry HQ camera I just changed my 10MP CCTV lens for a Schneider Componon 50mm. The result is much better without blur in the corners.
I make my captures in mode 1 1920*1080 reduced FOV with a ROI exactly of the ratio of the super8 frame 1500x1080 without any border. This mode assures me a decent 18 fps (Picamera Jpeg Capture on video port).I keep this resolution for all post-processing and final rendering.
I insist on the quality of the focus, it’s really very sensitive (I measure it with a laplacian) a micrometric sliding table seems indispensable to me.
The lens is mounted reverse with extension tubes (about 8cm for the resolution 1920x1080.). In the tubes a helical ring allows to adjust the magnification to obtain exactly the super8 frame. 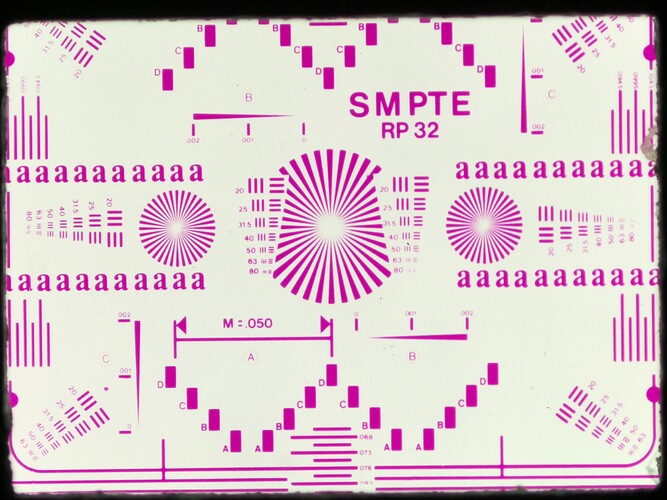 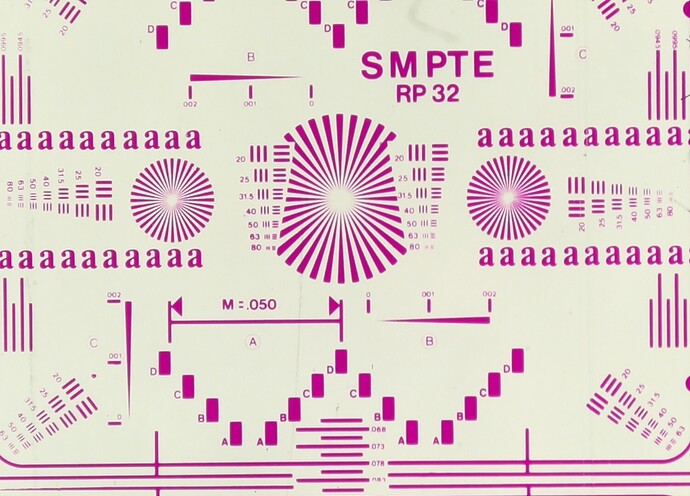 Raspberry HQ Camera Mode 1 Componon S 50mm
HDR merge of three exposures
Note the effect of the HDR on the sleeve of the baby, in auto exposure it is burned without any detail. 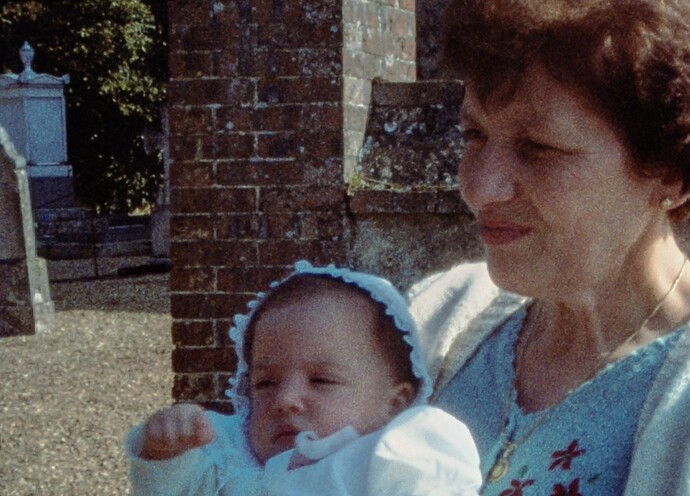 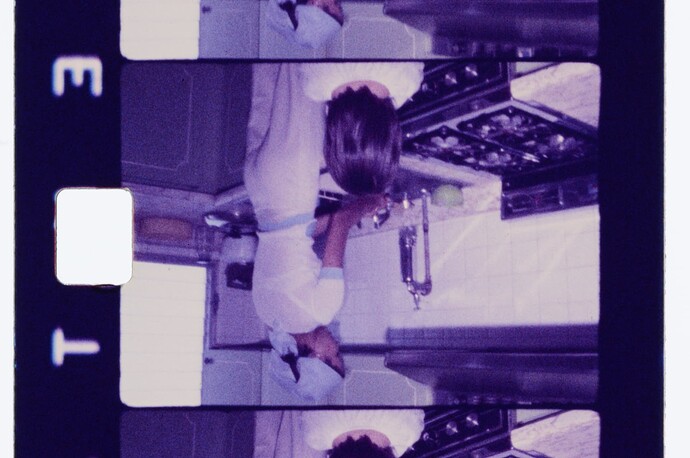 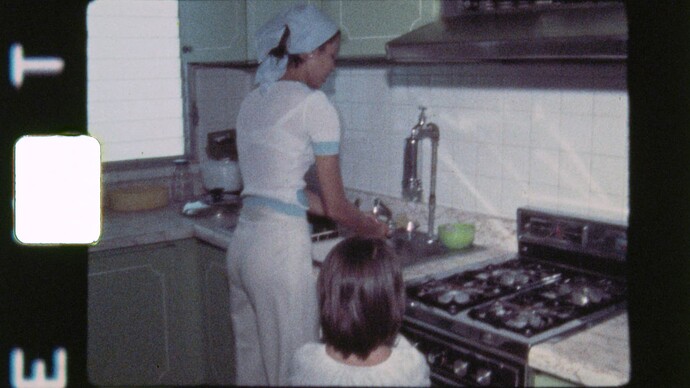