I want to share with the forum the machine that I have built.
It is based on an old 8mm / Super8 Ricoh Auto 8p Trioscope projector from 1975.
The reason for using the projector has been to have it available at home. It was broken and did not work as such a projector. Apart from this, in my case it greatly facilitated the task of transporting the film. It would not have been possible for me to build a machine from scratch, since although I have some manual skills, I do not have a suitable workshop.
So I removed all the unnecessary components from the projector and attached a new stepper motor with its corresponding driver.
The transmission is carried out by means of a toothed wheel and pinion, so that once the first frame is in position, it is only necessary to turn one complete turn of the main shaft of the projector to advance or back exactly one frame.
As you can see, the whole assembly can be closed with the original projector cover and I can have it on my desk. 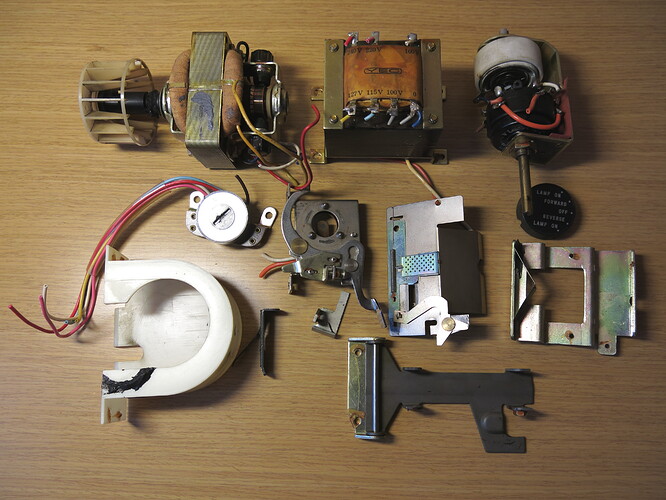 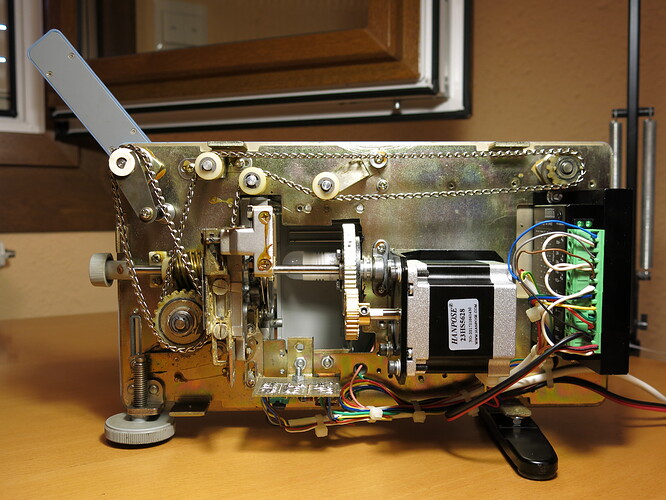 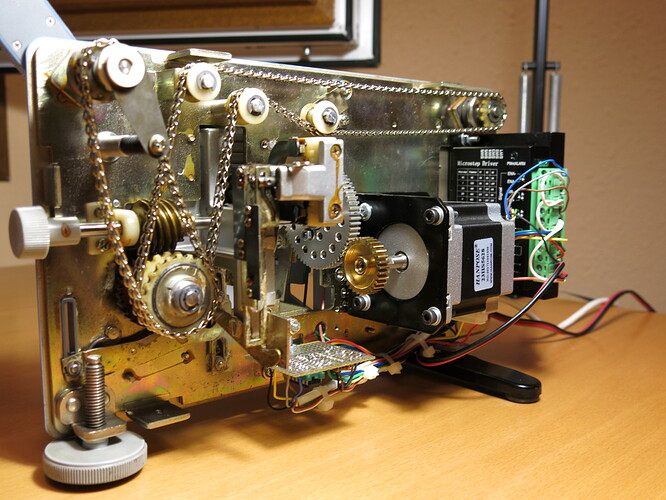 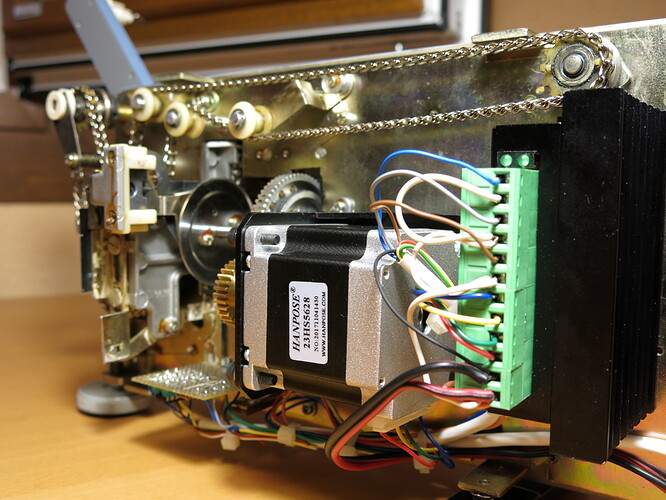 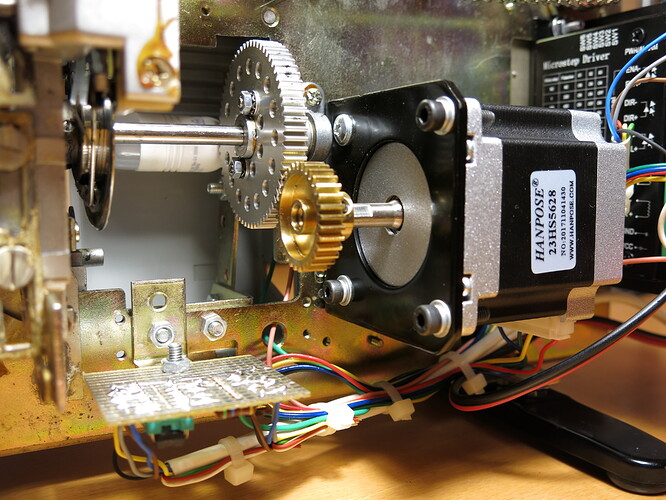 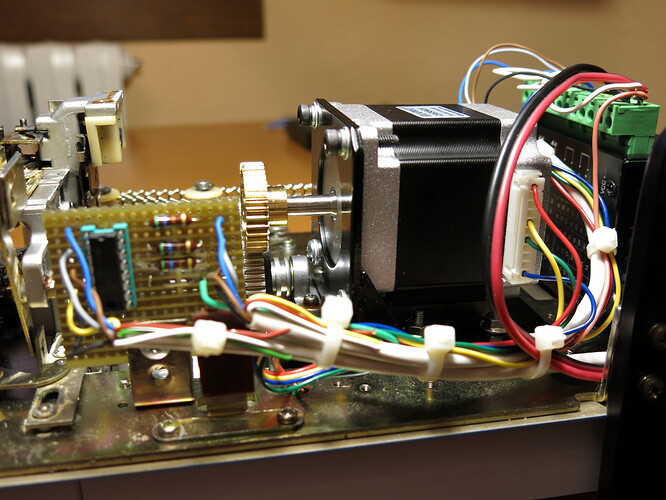 I have recently modified the mechanical coupling to make the film transport faster and now it looks like this: 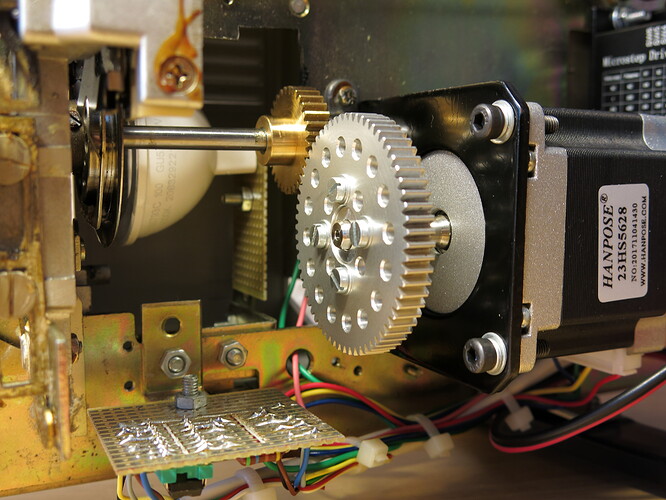 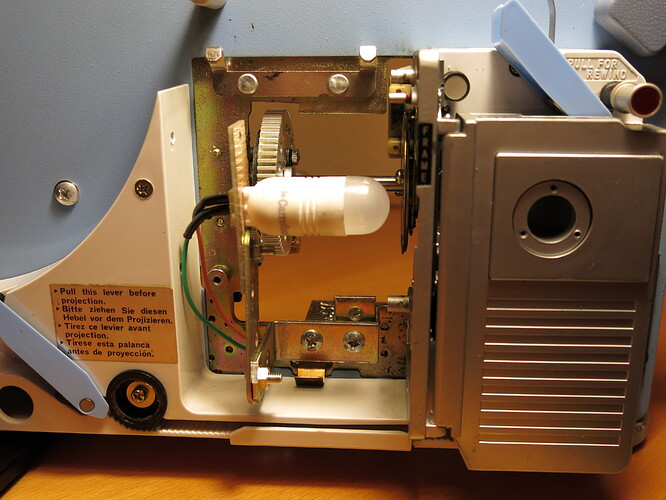 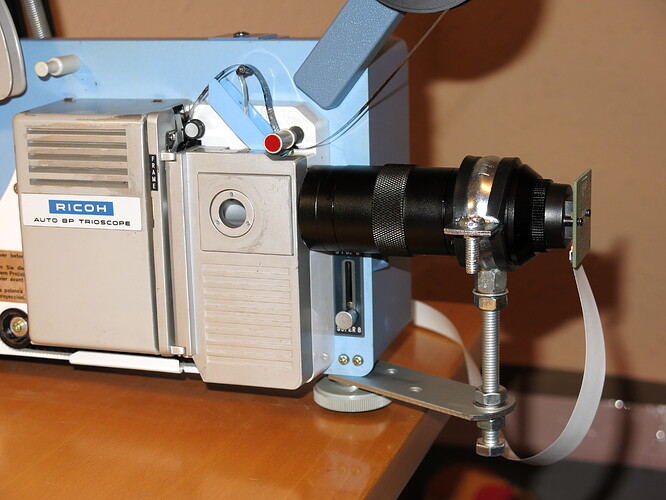 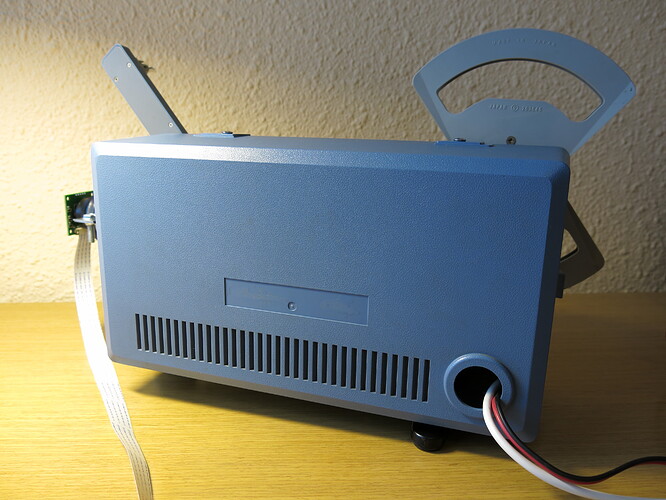 Finally a video of the system in operation: 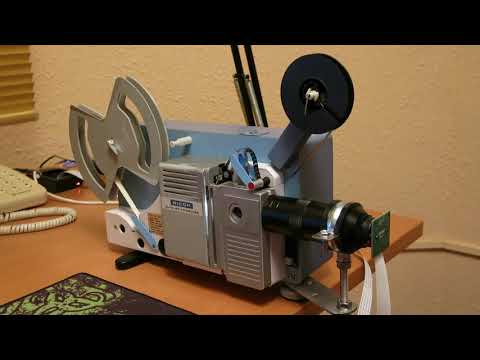 Greetings to all members of the forum.

Nice very compact just a question what software are you using to capture the scans and control the PiPojector?? looks lik ea very nice interface… thanks for sharing i’m about to embark on my own build of a super 8 scanner for my families films…

First of all, I thank you for your interest.

The software that I use in my DSuper8 project (Digitize Super8), I have developed myself. It is based on the original software from the rpi-film-capture project GitHub - jphfilm/rpi-film-capture: A project to capture 8mm and 16mm films using a raspberry pi & camera, and a modified movie projector..

When I made the decision to build my own system, I came across the rpi-film-capture project that I immediately identified with. It was just what I wanted to do.

However, the software is highly modified and adapted to my tastes and needs.

From the original software I have taken the following elements:

For my part, I have ported the software to Python 3 and added new functionalities.

An essential feature of my device, contrary to the vast majority of projects I have seen, is that it does not use any type of detector to determine the correct position of the frame to be digitized.

From the beginning I made the following reasoning: the original projector, when it worked as such a projector, did not use any sensor to correctly position the frame to be projected and, nevertheless, the image remained stable on the screen.

In my project I do exactly the same, thus avoiding unnecessary complications in modifying the projector and software.

After many digitized films I can assure you that it works correctly and with total precision, using the stepper motor and the gear transmission.

Now I am in the process of adapting the device to use the Raspberry Pi HQ camera. The original camera was the Raspberry Pi V1 which has the lens shading problem and therefore the software has to be adapted as well.

If you are interested in my software, I can send it to you (free of course) although the GUI is in Spanish, you can translate it yourself.
Personally, I run the software on Linux, both on the Raspberry Pi and on the main computer, although since it is written in Python I don’t think it is difficult to adapt to other operating systems.

Hello Manuel, very interesting project.
I sent you a mail with my email address so if you’re so kind to send me a copy of your software.
I thank you very much indeed
Mauro

very impressive yes would love a copy of your software. kdhildred5@gmail.com is my address.
Regards
Kevin.

I just finished upgrading my device. I have made the following changes:

Attached are some photos of the current configuration of the machine. 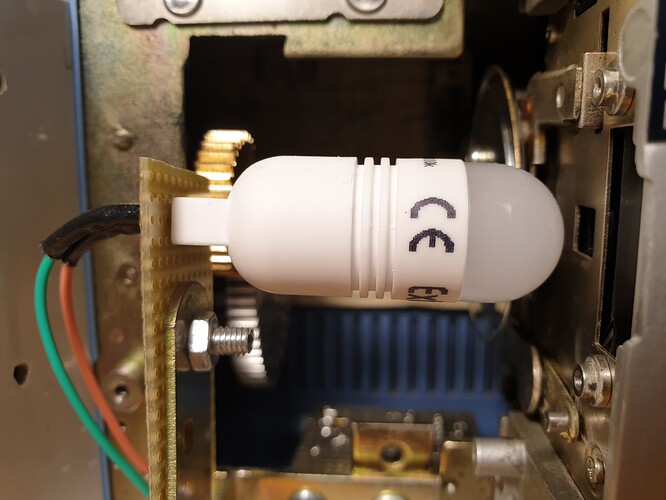 Label of the new lamp. 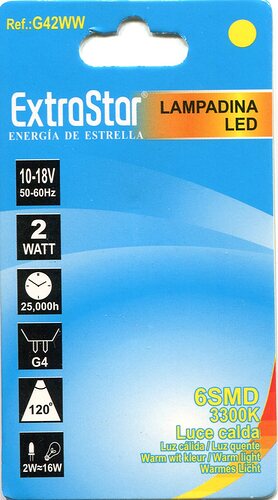 Histogram obtained from the light provided by the lamp, after adjusting the gains of blue and red. 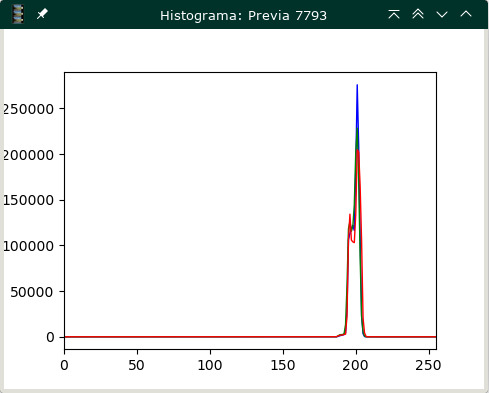 By physical impossibility, due to the dimensions of the new lens, I have not been able to bring it closer to the film, in order to obtain more magnification of the frame, but anyway, in my opinion, the magnification achieved is sufficient. 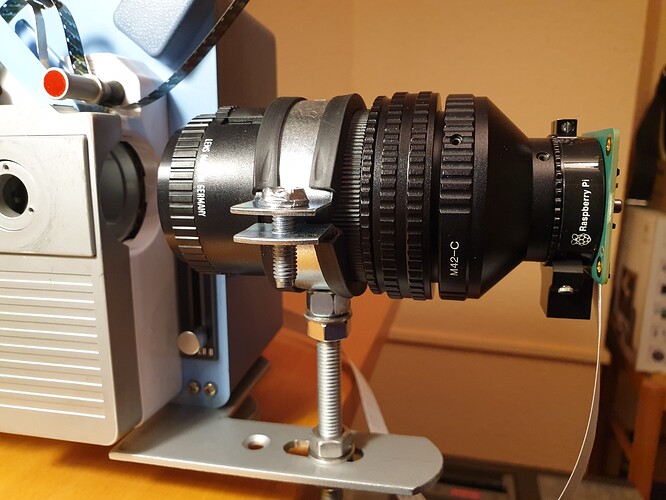 Images captured with the new settings:

Full field of view covered by the camera. 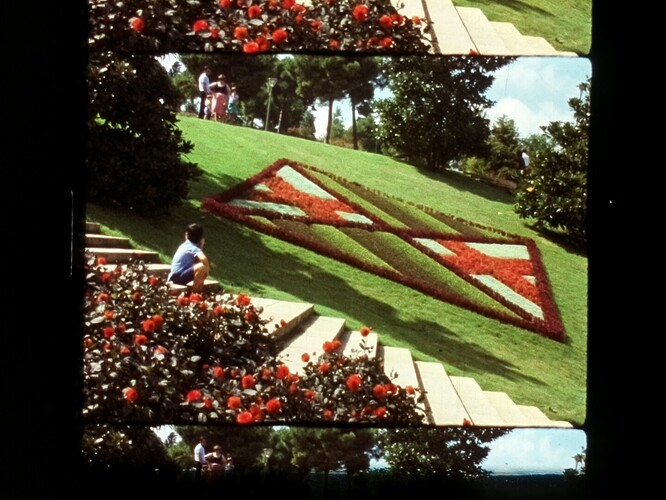 Photo of the same frame with zoom applied. 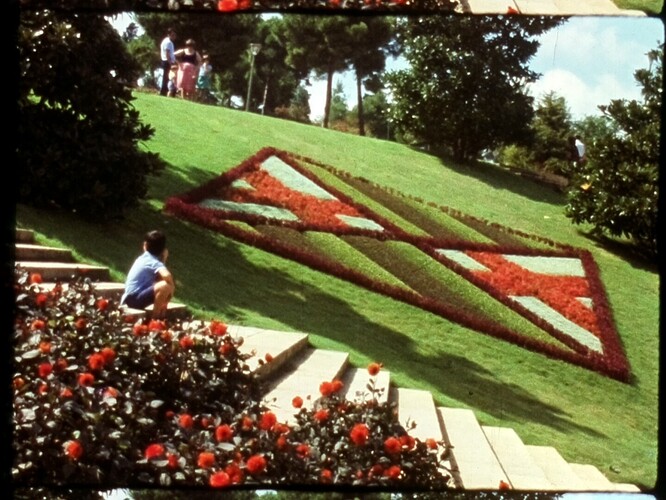 Photo of the same frame with trimmed margins, corner rounding, and resize to HQ (1490x1080 px) 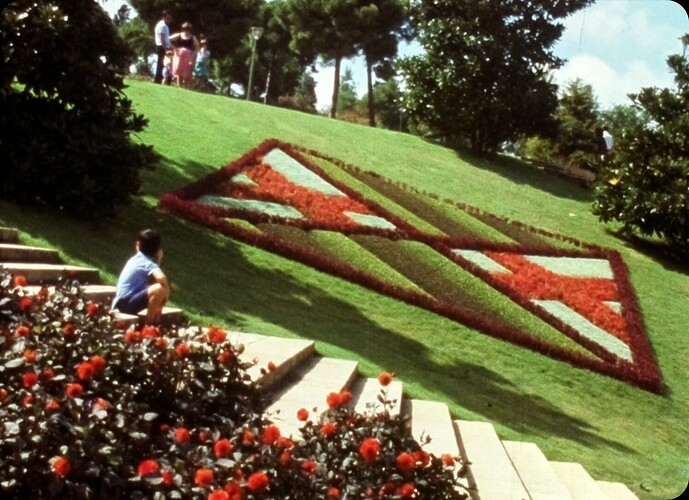 The images have been taken with my own software, with the following settings: Rodagon at f/5.6, iso 100, 6 shots per frame between 0.8 and 12 ms (4 stops), capture resolution 2028x1520 px. Applied Mertens fusion to obtain the final HDR image. All the aforementioned operations (zooming, cropping, corner rounding, Mertens fusion, etc.) are carried out on the fly as the frames are digitized. Only the final HDR image is saved.

Thank you for reading.